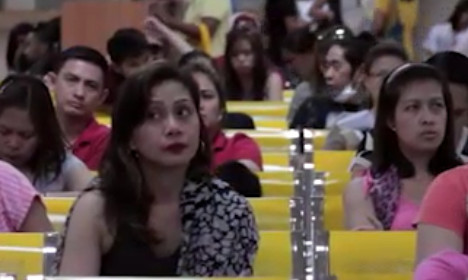 In the capital alone, one in eight legal residents are foreign, with Filipinos, Romanians and Bangladeshis being the biggest groups among 185 ethnic minorities, according to figures from the Italian think-tank, Censis.

In an investigation entitled 'Excess Baggage', provided to The Local and originally published by Orb, a Washington DC-based non-profit journalism organization, Pierre Kattar and Alex Park explore the issues facing the Filipino community in Rome, particularly when it comes to their children being embraced.

In Rome, Italian families with money to spare benefit from a system which, since the 1970s, has brought Filipino workers into their homes to clean houses, cook meals, and take care of Italian children.

Today, that system has created in Italy one of the largest Filipino populations anywhere in the world. But in prioritizing labour, the Italian government and the employers it favours have neglected the children of those workers, who are typically treated as a burden on their parents’ working lives, and not as an asset in a country with a declining birthrate.

For immigrant workers in Italy, it’s important to keep the boss happy. Since Italian law only allows for employers – not spouses, brothers, sisters, aunts, or uncles – to sponsor a migrant worker’s residence permit, keeping a job is also essential to staying in the country.

But having a child can complicate the balance. While maternity leave is guaranteed under Italian law, domestic workers are explicitly denied the right because their first responsibility is to care for their clients’ families. If their kids are sick, migrant workers have to take time off work, but employers are often willing to fire their help for missing a day.

When Rowena Alota, a Filipino house cleaner in Rome, was forced to choose between her job and her daughter, Navie, she, like many Filipino parents in Italy, chose to send her daughter to the Philippines to be raised. Like many Filipino children, when Ronavie was old enough, her mother called her back to Rome to live with her. As Navie explains below, her life ever since has been marked by hardship.

Among young Filipinos in Rome, the sense of displacement that Navie describes is common. The thousands of Filipino children who arrive to Italy every year are not joining the Italian mainstream but forming their own society at its margins.

At night in Rome, Filipino youth caught between the country they left and the one they live in now will sometimes congregate around Piazza Vittorio to drink and smoke. Raphael, a 21-year-old Filipino, is one of those young people. Below, he explains some of what his life and the life of his peers is like.

In many European countries, young immigrants like the Filipinos who hang out on Piazza Vittorio are marginalized not just by the nature of their arrival. They’re also more likely to be poorer than their native-born peers.

At 23 percent, the poverty rate for native children in Italy is high, but, at 31 percent, the rate for immigrant children is higher. Even some countries, like Belgium, which exhibit a relatively low poverty rate for native children, often see a significant proportion of immigrant children living in poverty. With their place in society characterized by such contrasts, is it any surprise that so many immigrant youth struggle to fit into their adopted societies?

By Pierre Kattar and Alex Park