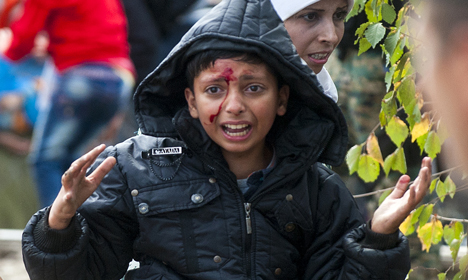 A young migrant injured during clashes between Macedonian police and migrants at the border between Greece and Macedonia. Photo: AFP

In a hard-hitting interview, Paolo Gentiloni said the kind of chaotic scenes witnessed this weekend at the Greece-Macedonia border represented a real threat to the free movement of people across the bloc.

“On immigration, Europe is in danger of displaying the worst of itself: selfishness, haphazard decision-making and rows between member states,” Gentiloni told Il Messaggero.

“I am very worried. Today it is on this issue that Europe will either rediscover its soul or lose it for good.”

Gentiloni urged Italy's EU partners to stop squabbling and start working on a common solution to the crisis.

The alternative, he warned, would be the inevitable collapse of the Schengen accords, which allow free travel across much of continental Europe.

“What is at risk is one of the fundamental pillars of the European Union: the free circulation of people,” the minister said.

“From the Sicilian coast to Kos, from Macedonia to Hungary and at Calais, tensions are mounting and, over time, they could put Schengen in question.

“Can we imagine a Union without Schengen? A return to the old borders?

“Migrants are not arriving in Greece, Italy or Hungary. They're arriving in Europe. That is why the reception rules have to be 'Europeanised'.”

EU interior and foreign ministers will discuss the migrant crisis in mid-October, ahead of a summit in Malta in November, French Interior Minister Bernard Cazeneuve said last Thursday.