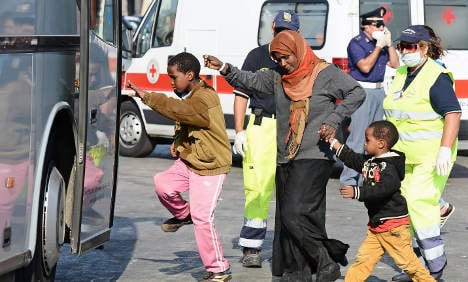 The latest arrivals will lift to more than 108,000 the number of asylum seekers and other migrants to have arrived in Italy this year. Photo: Giovanni Isolino/AFP

The first groups began arriving at Italian ports on Sunday afternoon. Among them were a new-born baby and 20 unaccompanied minors on a Doctors without Borders (MSF) ship that docked at Vibo Valentia.

The coastguard said it had, over the course of Saturday, received distress calls from a total of 22 vessels, either inflatable dinghies or wooden former fishing boats – all of them dangerously overcrowded and many of them lacking basic safety equipment.

Boats from the Italian coastguard, navy and customs police all took part in the rescue operation alongside Norway's Siem Pilot and Ireland's Niamh, ships serving with the EU's Triton search and rescue mission.

Britain's Enterprise, which is part of fledgling European Union (EU) naval mission Eunavfor Med intended to take on people smugglers, also got involved, picking up some 440 migrants from four inflatables.

The mission was set up by EU leaders in May with a view to intercepting traffickers and possibly destroying their boats in Libya.

To date, however, it only has a mandate to collect intelligence and, even if it gets a green light to start intercepting smugglers' ships, it will only be able to do so in international waters.

At present the vast majority of distress calls sent out from migrant boats come from inside Libyan territorial waters, where Eunavfor could not act without cover from a UN resolution.

There were no reports of migrants having died during Saturday's operations or prior to the rescue boats arriving.

With military rescue assets at full stretch, the coastguard said it had been obliged to ask merchant ships to go to the aid boats which were in trouble on Sunday. In one case it transferred a group of 300 people rescued off three inflatables to MSF's Dignity One.

The latest arrivals will lift to more than 108,000 the number of asylum seekers and other migrants to have arrived in Italy this year.

More than 150,000 have landed in Greece, most of them with the aim of travelling on to northern Europe via the Balkans.