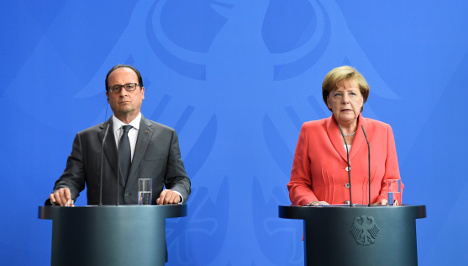 Her comments came after a summit with French President Francois Hollande, during which they called for a unified response to Europe's biggest migrant crisis since the Second World War, as a new wave of refugees began entering the EU from Serbia.

Merkel stressed that the centres must be set up at the first ports of call to be administered and staffed by the EU as a whole by the end of the year.

“We cannot tolerate a delay,” she said.

The slow progress by Italy in processing the asylum claims prompted 100 asylum seekers at a reception centre in Milan to stage a road-blocking protest on Monday.

The high-profile demonstration triggered a furious reaction from right-wing politicians who have consistently attacked the government over its failure to stem the flow of new arrivals.

Nearly 5,000 people were rescued off the coast of Libya over the weekend, and Italy was on Monday starting to process those applications.

Italian Foreign Minister Paolo Gentiloni, who has warned that the deepening crisis could pose a major threat to the “soul” of Europe, said that “either the EU rediscovers its true self or it disappears altogether”.

The EU has been struggling to find a response to the unprecedented numbers arriving – from the thousands landing on the shores of Greece and Italy to the hundreds risking their lives to climb onto trucks to travel from France to Britain.