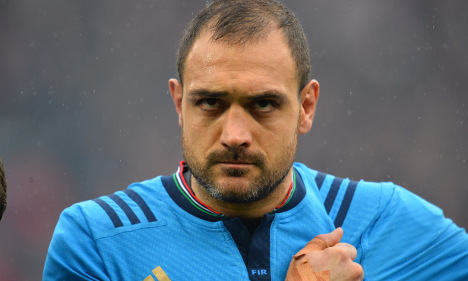 Second row forward Bortolami, 35, has amassed 112 caps for the Azzurri and captained Italy 40 times over the years.

But he was one of several players cut from an initial 40-man training camp squad by coach Jacques Brunel.

“It was very difficult to communicate the decision, especially when you've put in as much work as the lads have over the past nine weeks,” said Brunel.

“So to tell several players they were not coming to the World Cup was particularly difficult.

“Bortolami has represented Italy very well over the years, so it was a particularly difficult decision for us.”

Brunel said Bernabo, who put in a “solid” performance in a 16-12 defeat to Scotland at the weekend, gave Italy the added bonus of versatility.

“He is a lock but he can also play as a flanker, and that is a bonus for us at the World Cup,” added the Frenchman.

Bernabo was part of Italy's World Cup squad in 2007 but after being left out of the 2011 squad, he is now back among the Azzurri.

His inclusion is all the more interesting because he was left without a club at the end of the 2013-2014 season after leaving Treviso.

Bernabo signed for Zebre after being called up by the Italian club and has not looked back.

“I have to thank Zebre for giving me the opportunity to play again and for allowing me to fight my way back into the national team,” Bernabo told AFP in Turin.

Italy finished this year's Six Nations with more questions than answers about their World Cup hopes after a mediocre campaign in which a narrow win over Scotland was the only positive note.

The Italians have been drawn in a tough Pool D with hosts France, Ireland, Canada and Romania in England next month, and Brunel added: “We know it's not going to be easy against the likes of France and Ireland, who are favourites to progress out of the group.

“But you can't forget that we've beaten both sides in the Six Nations, in 2013. At the same time, we can't afford to underestimate Canada and Romania.

“Our aim is to get out of the group. Up till now, we've had a mixed bag of results and performances since the last World Cup.

“But all of our preparation period is over. It's time to prepare ourselves for one month of intense competition.”

Bernabo, who has fond memories of his last World Cup, in 2007, is confident Italy can spring a surprise or two.

“Every game will be like a final for us,” he added.

“I remember the last World Cup, running on to the field against the All Blacks, looking at my jersey with the World Cup logo and realising how big a stage I was on.

“I'm relishing the opportunity to do it again and I know that, after two intense months of training, the lads are all itching to play.”