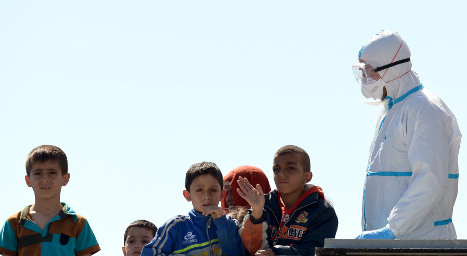 More than 10,000 migrant children have arrived in Italy so far this year, 7,350 of then unaccompanied. Photo: Alberto Pizzoli/AFP

The teenager, who had suffered beatings and been constrained to do heavy labour without adequate food or water, was chronically ill when he was rescued from a people smuggler's boat on Sunday, the medical charity said.

He was unable to walk but after being transferred to the MSF vessel Dignity I, he had been responding well to treatment before succumbing to a cardiac arrest on Monday.

The poignant details of the teenager's final days were revealed after the ship arrived in the Sicilian port of Augusta on Tuesday, carrying 300 survivors as well as the teenager's corpse.

At least 107,000 people, many of them asylum seekers fleeing conflict or repressive regimes, have arrived by boat in Italy since the start of this year, according to the latest tally from the International Organization of Migrants.

More than 10,000 of them have been minors, 7,350 of them unaccompanied, according to another charity, Save the Children.

Most of them are teenagers with the largest group coming from Eritrea where young males face compulsory conscription into the armed forces.

But some are even younger. According to Italian daily La Repubblica, among the refugees who arrived in Sicily on Monday was an Eritrean boy who left his homeland last year aged 11 and reached Libya after an odyssey undertaken largely on foot that included crossing two major rivers and a six-month trek across the Sudanese dessert.