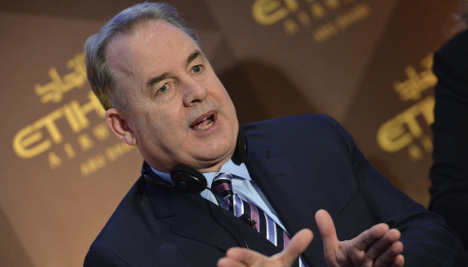 Etihad saved Italy’s national carrier Alitalia from bankruptcy a year ago when it took a 49 percent stake in the embattled airline. Hogan is also Vice-President of Alitalia.

But the airline chief warned Alitalia would consider leaving Rome’s Fiumicino airport if the government failed to take urgent action to address airport infrastructure, particularly after a serious fire has disrupted flights there since July.

“If Fiumicino continues to provide mediocre services and concentrate on low-cost airlines, we will be forced to go elsewhere,” Hogan said.

He said incidents like the fire in Terminal 3 “can have an impact on confidence and the desire to invest”.

“There are 169 airports in Europe where it is easy to operate. What we have to do is become competitive, win the respect of our Italian clientele so that they buy Alitalia tickets. Infrastructure is also important.”

Hogan was speaking at the Rimini Roundtable Discussion, a prestigious annual event held in the northern coastal town of Rimini to discuss issues of cultural and economic importance to Italy.

“Rome has to rise to the challenge,” Hogan said. “What is needed is an integrated tourism strategy with support for infrastructure. For us it is fundamental.”

Italian media said Alitalia alone estimates the economic damage caused by the airport fire to be around €80 million.

Hogan said that he was at first reluctant to invest in Alitalia when approached last year.

“I said no immediately because I saw a business that had undergone very difficult times for many years,” he said. Over a year late, Hogan now describes the deal as “an excellent investment”.

Etihad’s commitment was the largest part of a broader investment with other stakeholders, which totalled €860 million.

“Let’s not forget that nobody else wanted to invest in Alitalia,” Hogan said. “But we see a great future for Alitalia, and we are committed to working with other shareholders, and with the airline, to help rebuild it as a premium brand and a profitable business.

“We are not a bank,” Hogan said. “We needed to stabilize the business financially by providing fresh capital.”

The Minister for Infrastructure, Graziano Delrio, who was also at the Rimini conference, said the government was ready to do more and would invest €800 million on airport infrastructure over the next two years.

Etihad Airways helped expand Alitalia's global reach by connecting the networks of both airlines via Etihad's hub and home base in Abu Dhabi, capital of the United Arab Emirates.