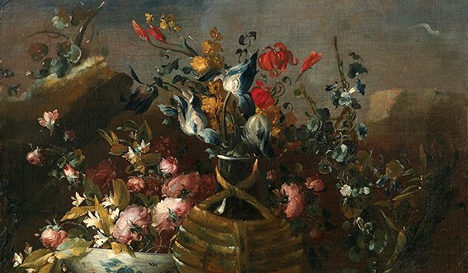 The "Flowers" painting forms part of a collection of 55 artworks in Taipei. Photo: Taiwan Web Museum

Organizers said the “Flowers” painting, which forms part of a collection of 55 artworks in Taipei, was by Italian artist Paolo Porpora and dated back to the 1600s.

But a report in Taiwan's Apple Daily said the painting seemed identical to an artwork entitled “Composizione con vaso di fiori,” a 17th-century piece by Mario Nuzzi, which was listed in the 2012 catalogue of the Della Rocca Casa d'Aste auction house, with a guide price of 25,000 to 30,000 euros ($28,700-$34,000). The work went unsold.

David Sun, head of TST Art of Discovery Co, which sponsored the Taiwan exhibition, insisted that the two paintings were different, without going into details.

His defence of the show, however, has failed to quell suspicions from professionals and the media.

“From a professional's perspective, if the paintings are so old and expensive, they should not have been exposed to an environment without constant temperature and humidity,” curator Sean Hu of Taipei-based Hu's Art Company told AFP.

“There are too many questions about it…. No one knows if the paintings are genuine or fake.”

Video footage released by the organisers shows the boy on Sunday tripping over a platform in front of the artwork and then bracing himself against the painting to break his fall. He then looks around helplessly before walking away.

The 200-centimetre painting was restored on site Monday and is now back on display. The organisers decided not to seek damages from the boy's family, according to Taiwan's Central News Agency.

A self-portrait by Leonardo Da Vinci worth 200 million euros ($231 million) is also on display, according to the exhibition's website.