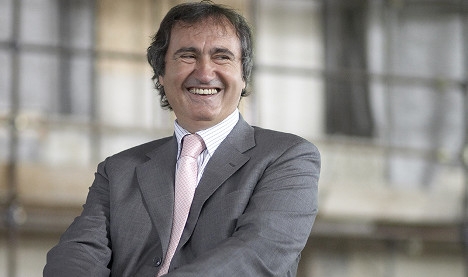 “There will be no Gay Pride in my Venice,” Luigi Brugnaro said in an interview with La Repubblica, describing such celebrations as “a farce” and “the ultimate in kitsch”.

“Let them go and do it in Milan or under your windows,” he told his interviewer.

That move resulted in him being branded a bigot by Elton John but he insists he is no homophobe, telling Repubblica that he has “gay friends”.

Flavio Romani, the president of Italy's main gay rights group Arcigay, said the mayor could not impose his personal preferences to an entire city.

“Venice is a cosmopolitan city where multiple cultures and religions meet. Brugnaro has to understand that it does not only belong to him,” Romani told AFP.

Veneto, the region that includes Venice, has a Gay Pride parade every year. It was last in Venice in 2014 and is scheduled to return there in 2016 after being hosted by Verona this year.

“We will be back next year and we invite the mayor to march at the head of the parade with us. That way he will see what a Gay Pride really is,” Romani said.

Fabrizio Marrazzo, spokesman for another lobby group, Gay Center, accused Brugnaro of trying to turn Venice into an “off limits” city for lesbians and gays.

“We have to respond. We cannot accept such blatant discrimination,” he said, urging the gay community to organize a national Pride march in Venice with Elton John leading the way.

As well as coming under fire from the veteran British rock star, Brugnaro has been attacked by many Italian commentators for tarnishing the city's global image as a beacon of civilisation.

His latest outburst came just a week before the city is due to host Johnny Depp and a string of other international cinema stars for the annual film festival.