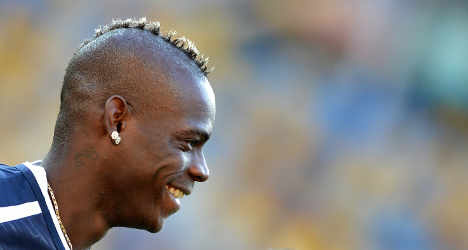 Mario Balotelli will return to AC Milan for a season. Photo: Gabriel Buoys/AFP

Of them all, Balotelli's return to Milan on a one-year loan deal following a disastrous first season with Liverpool is by far the most controversial.

Loved and hated in equal measure, the 25-year-old continues to divide fans and mystify the pundits who believe there is still so much more to come from a player whose controversies far outweigh his true achievements in the game.

And not many Liverpool fans would disagree – after a season in which Balotelli failed to spark and, with memories still fresh after three notorious years at Manchester City, created headlines for all the wrong reasons.

He took 13 games to hit his first league goal for the Reds and Balotelli was then suspended for one game and fined £25,000 ($39,000) for posting an image on social media which appeared to contain anti-Semitic and racist references.

Now, Milan have taken a gamble that Balotelli will morph into 'SuperMario'.

Like many of his international peers, Balotelli is keen to secure regular football ahead of next summer's European Championships in France.

Although he avoided that specific question on Tuesday, he said: “I'm happy to be back. This club is in my heart and I always hoped to play here again.”

Still, he must have got the chills when reading the reaction in Italy to his return.

A poll on the popular 'Processo del Lunedi' sports programme on Rai television Monday showed 62 percent of fans to be against his return.

“I wish him all the best, but he's never really taken off as a player. If he returns, it is totally absurd,” said the former Croatia midfielder.

Balotelli, signed by Liverpool for £16m ($25m) last summer, is not the only EPL casualty to find a degree of solace in Italy.

Out-of-favour Manchester City striker Edin Dzeko, bought from Wolfsburg for £27m ($42m) in January 2011, has signed a one-year loan deal with Roma, where he joined up with Chelsea-owned Mohamed Salah following the Egyptian's loan move to the capital club from Fiorentina.

Dzeko, tied to City until 2018, was partly lured by Bosnian teammate Miralem Pjanic's praise of Roma, and regular football.

The Bosnian has scored 72 goals in 189 games in all competitions at Etihad Stadium but had a mixed season with Manuel Pellegrini's side last year.

City teammate Stevan Jovetic is also out on loan, at Inter Milan, having fallen out with Pellegrini when omitted from City's Champions League squad last season, when he started only 11 games.

Jovetic, sold by Fiorentina to City for £22m ($34.5m) in July 2013, rescued Inter's blushes on Sunday with a late winner that is among the pick of the weekend's goals.

Another ex-Fiorentina player, Juan Cuadrado, is the latest to fail the EPL acid test.

While Salah went on to sparkle for the Florence-based club, Cuadrado's game time at Stamford Bridge was limited.

Months after Mourinho claimed: “I do believe that he'll be amazing next season”, Cuadrado is now at Juventus on a loan deal.

But contrary to Balotelli, his welcome was far warmer – the Colombian welcomed by hundreds of fans at Milan's Malpensa airport on Monday evening.