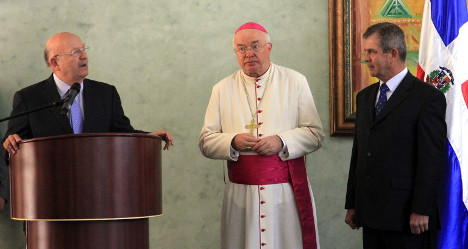 Wesolowski, 67, was found at dawn at his residence in the city state, a Vatican statement said.

The first indications were that he died of natural causes but an autopsy was to be carried out during the day and the results published as soon as possible, it said, adding that Pope Francis was being kept fully informed.

Wesolowski's death came six weeks after his landmark trial was suspended after only seven minutes because of an undisclosed illness which resulted in the accused being hospitalised on the eve of its start.

Wesolowski was charged with possessing child pornography in Rome in 2013-14, and the sexual abuse of minors during his 2008-13 stint as the Vatican nuncio, or ambassador, in the Dominican Republic.

He was secretly recalled from his posting after the church hierarchy was informed that he had regularly paid young Dominican shoeshine boys to perform sex acts on him.

Dominican authorities identified four victims aged between 13 and 16 at the time who were willing to testify against the cleric. But they failed in their attempt to have extradited to stand trial in the Caribbean.

Wesolowski was defrocked by a church court in June 2014.

He was placed under house arrest in September 2014 following the decision to pursue criminal charges against him.

Decades of inertia and cover-ups

Both moves were personally ordered by Pope Francis, according to Vatican officials who have portrayed the handling of the case as reflecting the pontiff's determination to rid the Church of the scourge of paedophilia after decades of inertia and cover-ups.

Earlier this year, Francis announced plans to create an internal Church tribunal empowered to punish bishops who fail to act on allegations of abuse against clerics in their dioceses.

Francis has also established a commission of experts that includes abuse victims to advise him on reforms.

And, in June, he accepted the resignation of two American bishops who had been cited in a US court case as having failed to take steps to ensure minors were protected from a paedophile priest working under them.

Although Francis has been widely praised for taking decisive action on an issue which had badly tarnished the standing of the church, critics say his initiatives remain insufficient.

The new church tribunal, for example, has been welcomed by some survivors' groups but others say it repeats the mistakes of the past as it leaves clerics in charge of deciding the fate of other clerics.

Wesolowski had been a priest since 1972 and owed his high-flying career to former Pope John Paul II, who ordained him when he was the archbishop of Krakow and then named him as a bishop in 2000.

He served as a papal nuncio in Bolivia and several Asian countries before taking up his post in the Dominican Republic in 2008.