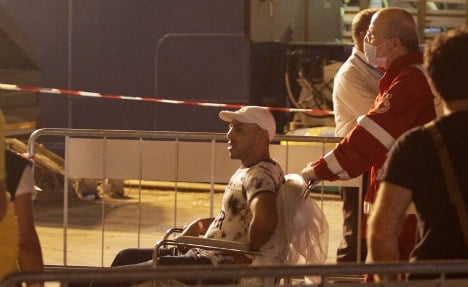 “Yesterday was a difficult day,” Bryant said in a Skype interview with AFP on Thursday.

The 56-year-old doctor was on a mission on Wednesday with Doctors Without Borders on the Phoenix, a vessel dedicated to rescuing migrants, when he was asked to help the Swedish coast guard during their rescue of a wooden boat with over 450 people on board.

“I went over there, with one of our nurses…We quickly saw that there were three or four people who were improving on the deck, so I went back on to the wooden boat and below deck, and I discovered many dead bodies.”

Fifty-two dead bodies to be precise. People that left lives of poverty and countries wrenched by conflict in hopes of reaching Europe and a better life.

Bryant said that when he began examining the bodies, many of them were already stiff. Equipped with a headlight, and an air hose for air supply below deck, Bryant continued to look for possible survivors.

“I started checking people for signs of life, and I stopped counting after 24…”

The doctor said there were fumes from petrol in the hold.

“I just quickly checked for signs of life and moved on. There was water in the boat, some people were half in the water, face down…”

“When I came back up on top, there was a little more space and there were four bodies lying, but one of them was actually just barely breathing,” Bryant said.

The man was quickly taken to a hospital on the Italian island of Lampedusa via helicopter.

Bryant's work was not over yet, however.

He then examined the other migrants on the boat, as well hundreds more rescued in the same area Wednesday.

Reflecting on the macabre scene in the boat, he said: “It's not something that I want to do again.

“I didn't sleep last night, afterwards. Actually, many of our staff just rested but didn't sleep.”

According to the Italian coast guard, which coordinates rescue operations between Libya and Italy, around 3,000 migrants were rescued Wednesday, with another 1,400 rescued on Thursday.

“When they come on board, we have the opportunity to speak with them. On the first day, most of them are exhausted, they sleep a lot.”

But soon, many of the migrants begin opening up about their journeys.

“After that you get to hear their stories, and it can be a very sad time, a very anxious time,” Bryant said.

Bryant calls the situation “avoidable” if there is enough of a global response. But more deaths are inevitable, the medic said.

“These aren't just numbers, these are people who have stories that we will never get a chance to hear.”