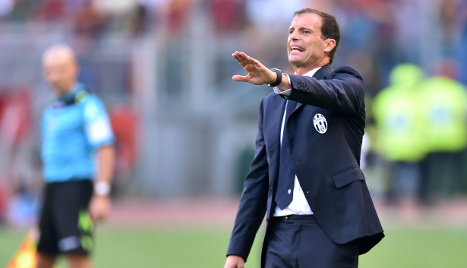 A week after being stunned at home by Udinese, Juventus, the Italian champions and beaten Champions League finalists, suffered a second straight league defeat at the start of the season for the first time in their history.

But the 48-year-old Italian suggested the Turin giants, only a few months after a fairytale end to a double-winning season, have yet to focus fully on the job of defending their fourth consecutive title.

“I'm not worried, but we have to change something, namely our mental approach,” said Allegri, whose side has undergone several changes since last season.

In a later tweet, Allegri added that Juventus have to “work to fix the things that are not working, get the new lads settled and don't cry about it: let's get back on top quickly!”

Runners-up to Juventus the past two seasons, Roma raced into a 2-0 lead with 11 minutes to play thanks to Bosnia pair Miralem Pjanic and Edin Dzeko after Juventus had been reduced to 10 men following Patrice Evra's sending-off.

The champions, who sit 17th, pulled a consolation goal back, their first of the league season, through Paulo Dybala in the final minutes.

But Roma were dominant throughout and fully deserved beating Juventus in the league for the first time since Francesco Totti sealed a 1-0 win in February 2013.

“We dominated them so we're looking at the glass half-full, but we went to sleep at the end and gave them a really soft goal,” Roma captain Daniele De Rossi told Sky Sport.

“But I think we played incredibly. You can't forget, Juventus were challenging for the Champions League (in the final) a few months ago.”

Having slipped to a 1-1 draw at Verona last week, Roma emerged among Serie A's high-flyers on a day that produced more than a few surprises.

Lazio, whose Champions League group stage hopes were ended midweek in the play-off by Bayer Leverkusen, looked despondent as Chievo ran riot at their Bentegodi stadium.

Riccardo Meggiorino's opener took a deflection before bobbling past Lazio goalkeeper Etrit Berisha on 12 minutes, but his next trick was far more impressive.

As a cross from the left was swept beyond the far post, Meggiorini somehow got his heel to the ball and knocked it back in towards Alberto Paloschi, who beat Berisha with a firm header from close range.

Former AC Milan forward Walter Birsa all but wrapped up the points for the hosts on the stroke of half-time when he curled the perfect free kick into Berisha's top right-hand corner.

Paloschi, another ex-Milan forward, had his second of the night just after the hour mark as Lazio crumbled.

“The lads fully deserved the win, but that doesn't mean it was easy,” said Chievo coach Rolando Maran.

Gonzalo Higuain opened his account this season with a first half brace as Napoli raced to a 2-0 lead at home to Sampdoria.

But an Eder penalty on the hour reduced the arrears and the Brazil-born Italy international levelled the match just a minute later as Napoli settled for their first point of the campaign.

In Turin, Fiorentina were given a 10th minute lead by Marco Alonso but two goals in the space of two minutes from Emiliano Moretti and Fabio Quagliarella turned the match on its head.

Torino sealed the points with their third on 77 minutes, thanks to Daniele Baselli's crisp shot from inside the area to move up to second.