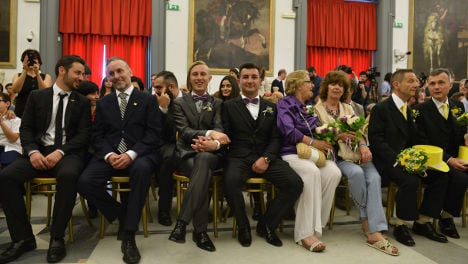 Gay couples wait to sign the civil unions register in Rome in May. Photo: Tiziana Fabi/AFP

The pledge comes less than two months after the European Court of Human Rights said Italy must recognize the rights of same-sex couples after the country violated the rights of three gay couples.

Renzi said the bill, which would allow civil unions nationwide, would be approved by the end of the year.

“But a lot will depend on how the debate in the Senate goes,” he was quoted by Ansa as saying.

“We must speed up constitutional reforms by the end of September and then wrap up civil unions within the first weeks of October,” and before the budget, so that the bill can go to parliament for approval.

The bill is being studied by a committee of the Senate but faces considerable opposition from Renzi’s centre-right allies.

Although same-sex marriage and civil unions are illegal in Italy, some cities allow gay couples who wed abroad to be registered.

In May, 17 gay, lesbian and heterosexual couples signed the first civil unions registered in Rome.

The capital joined Naples, Milan and dozens of other towns and cities in ensuring formal recognition of the couples in their dealings with the municipal authorities and, in the case of certain companies, with their employers.

The government has also faced mounting pressure to give same-sex couples more rights since Ireland voted to legalize gay marriage in late May, with Laura Boldrini, the president of Italy's parliament, arguing that it was time to legislate for civil unions.

The Ireland vote followed a call by the European Parliament in March for all EU countries to move towards recognizing civil unions and same-sex marriage as a political, social, human and civil right.