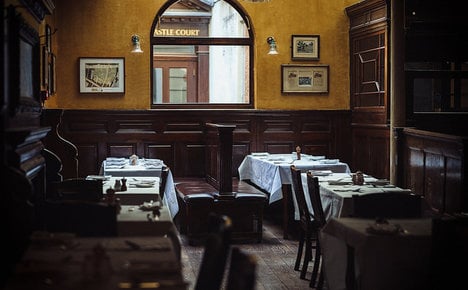 The bill came with an extra €16 that had been added to cover the cleaning costs of the tablecloth. Photo: Ged Dackys/Flickr

The family was holidaying on Sardinia's plush Emerald Coast when they decided to dine at the Baja Sardinia restaurant near the town of Arzachena, La Nuova Sardegna reported.

The restaurant's owner, Giuseppe Di Natale  has defended the charge of €15.90 that was added at the end of the meal. “We don't normally charge people like this but the tablecloth and napkins are linen and the charge just covers the expense of dry-cleaning them,” Di Natale told the paper.

“It wasn't just sauce on the table cloth – there was traces of pen too,” he said.

But the girl's father, Alession Desidera, thought the charge was totally unreasonable. “The waiter brought us those pens!” he argued. “My daughter was drawing on paper but some of it must have soaked through to the table cloth.”

In spite of being satisfied with the food – the surprise charge upset the family so much that after reluctantly paying they headed straight to the local police station to report the incident. They have also presented their case to a number of consumer rights associations.

This is not the only example of people finding strange charges on their bills. This summer, one poor tourist was left gobsmacked by a €20 service charges on four coffees brought at a bar in Ischica.