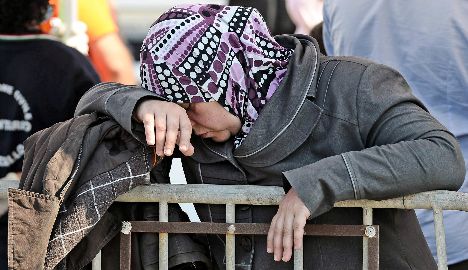 A woman arrives in Italy after being rescued in the Mediterranean. Photo: Giovanni Isolino/AFP

Between ten percent and 30 percent of asylum seekers reaching Europe are estimated to have been tortured in their home countries. All are at risk of trauma during desert crossings, a lawless Libya, or treacherous boat journeys.

Italy's Doctors for Human Rights association (Medu) noted in a recent report that over half of some 100 asylum seekers interviewed in Sicily had seen a travelling companion or close relative die during the Mediterranean crossing.

One man, who lost both his wife and child when the boat he was travelling on sank, was so distressed at having to relate the experience to an asylum commissioner, that he threw himself out of a window.

A fellow survivor, a 26-year old from Sub-Saharan Africa, spent so many hours desperately trying to keep his head above water as he clung to a bit of driftwood that he is now plagued by sensations of drowning at night, leading to insomnia and anxiety issues.

New arrivals are often confined for months in crowded centres while refugee applications are slowly processed.

Traumas can go undetected or have a detrimental effect on requests for asylum, according to psychologist Massimo Germani, who directed a centre for torture victims in Rome.

Germani said victims often narrate facts but not emotions, listing atrocities in such a neutral tone of voice that those examining their status doubt they are refugees “when it is actually a sign of a very serious problem”.

A study carried out in 2013 by the Italian Refugee Council (CIR) found that 38 percent of asylum seekers in Italy suffered from depression, while 44 percent were battling with complex post-traumatic stress disorder (PTSD).

Welcome centres are expected to provide psychological assistance as part of services financed by the state, but the interior ministry is unable to supply figures on how many migrants and refugees actually have access to care.

In theory, asylum seekers can use the public health system, though there are limited facilities tailored specifically for migrants and refugees, and the International Organization for Migration (IOM) said here too numbers were unclear.

Palermo psychologist Maria Chiara Monti works for one of the few clinics which organizes sessions twice a week, where both an anthropologist and a cultural mediator who speaks the patient's language are present.

“They are often vulnerable people or trauma victims, and the system – the long, bureaucratic process of asylum – worsens their mental health,” she told AFP, describing testimonies “from far away lands, which leave deep marks”.

“Sometimes therapy has to be interrupted because patients are moved, often without warning, to another centre. But we do the best we can with the time we have,” she said.

There are other challenges too: one 30-year-old from Gambia is so traumatized by an episode of police torture in his home country that his short-term memory is affected, meaning each session has to begin more or less from scratch.

From camps housing thousands of people to small converted hotels, “the implementation of psychological assistance is very patchy,” said Gennaro Migliore, head of a parliamentary investigation into Italy's reception system.

“The health system needs to be computerized to allow care to be monitored from the arrival of asylum seekers until they obtain their refugee status,” he said.

“There are sometimes some very good services, particularly in the centres for unaccompanied minors. But often, the health priority is elsewhere, in the fight against infections for example,” he added.

Fiorella Rathaus, who coordinates projects to support torture victims for the Italian Refugee Council, said that in numerous centres in fact, “often psychological assistance is not provided at all, or just for a few hours a week, and in general it's given by a young graduate little equipped to deal with such traumas”.

Psychologist Germani said some PTSD symptoms can be eased by giving sufferers access to decent living conditions, opportunities to enjoy themselves and prospects for the future – no easy task in a country struggling to deal with mass arrivals.

Others suffer from much graver traumas which need to be identified and addressed as soon as possible. “We're talking about people who have suffered repeated abuse, over a long time and in a coercive context,” he said.

“If they remain in the melee with the others, they cannot keep up. They cannot concentrate enough to learn Italian, they are unstable and their condition deteriorates with their isolation.

“That causes enormous damage, on both a human and social level, because they become a burden on the system, they turn into ghosts who congest social services for years,” he said.

Younger victims have been known to turn to prostitution, while unchecked trauma in those affected can boil over into violence.

The interior ministry set up a round table in November to draw up guidelines for welcome centres on psychological care, but in the meantime sufferers continue to fall through the gaps, while funding cuts have forced some public services – including Germani's – to shut their doors.