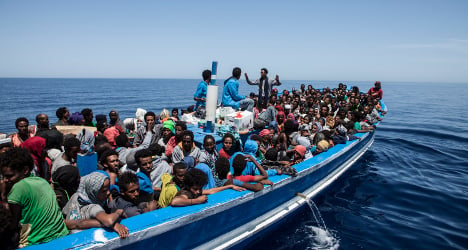 So far this year 118,500 people have arrived in Italy by sea. Photo: Moas/Jason Florio

Some 91 survivors rescued by the Italian coastguard on Thursday said the boat had been carrying between 120 and 140 people when it began to deflate, sparking panic and tipping some people overboard.

“As often happens, the dinghy, which had been inflated on the beach (of Misrata) just before departure, quickly began to deflate,” IOM spokesman Flavio Di Giacomo told AFP.

“People panicked, they all rushed to one side of the dinghy. Many fell in the water, some drowned while others managed to pull themselves back on board,” he said. Rescuers said they recovered just one body.

The survivors, who hail largely from Somalia but also include Sudanese and Nigerian nationals, were taken to a reception centre on the Italian island of Lampedusa.

In a separate mission on Thursday, a heavily pregnant Nigerian woman pulled to safety from a dinghy along with 105 other migrants gave birth on board the coast guard ship that had rescued her.

IOM said to date some 118,500 people have arrived in Italy by sea from the start of the year.