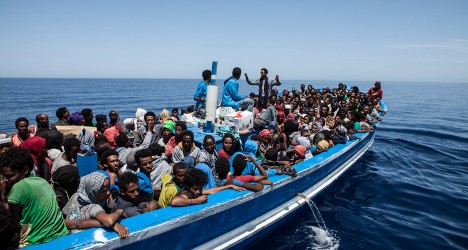 One in three migrants arriving in Italy this year has refused to be indentified. Photo: Moas/Jason Florio

Daniela Stradiotto, the director of the servizio di polizia scientifica, the unit of the Italian police force that deals with forensics and identification, told Ansa news that it was mostly Eritrean, Syrian and Somalian migrants refusing to be identified.

“It's technically illegal to force them to undergo photo and fingerprint identification,” she said.

“Police are looking for new legal powers to hold migrants for 72 hours instead of the current 12 in order to try to force them to undergo identification,” Stradiotto added.

According to the EU's Dublin regulation, migrants seeking asylum must identify themselves before their asylum applications can be processed – in theory, this must be done in the first EU country they arrive in.

But the figures seem to show that many are choosing to remain under the radar in Italy, in the hope of moving on to other EU countries where they might find better prospects.

The Dublin regulation also forces migrants to stay in the country where they submitted their application while it is being processed – which, in Italy especially. can take months, or even years.

During this time, should a migrant cross into another country, they must be returned to the one where their application was made.

“They don't want to be here, otherwise they would have to stay in our country under the accords. So when a police officer is in front of an Eritrean who is two meters tall, he cannot break his fingers but must respect his human rights.”

However, in the face of the ongoing migrant influx, the Dublin regulation has been partially suspended by some EU countries.

On August 24th Germany suspended the agreement, promising to process asylum applications for any Syrian refugee already in Europe, while on September 2nd the Czech Republic followed suit.