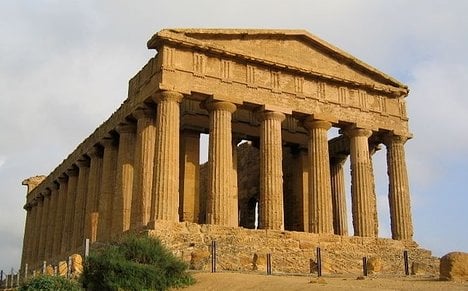 Students have unearthed two skeletons at Sicily's Valley of the Temples, shedding new light on the site during the post-classical period. Photo: Evan Erickson/Wikimedia

The skeletons of two men were discovered late last week and need to undergo analysis before they can be dated exactly, but it is thought they date back to the seventh century A.D.

“The find is important because it shows a human presence in the city during the post-classical age,” Valentina Caminneci, an archaeologist at Agrigento's Valley of the Temples, told the Local.

While the site is world-famous for its seven well-preserved Greek temples, less is known about its more recent history.

Lately, scholars have been trying to understand more about what happened to the site following the fall of the Roman Empire.

“We already know so much about the site in the classical period but now we are discovering its later history, which is the next step,” Caminneci explained.

The new finds date to a time shortly after Temple of Concordia was converted from a Pagan temple into a Christian basilica by the archbishop Gregory of Agrigento.

Scholars now believe that a cemetery might have existed in front of the temple after it had been converted into a Christian church – but more digs will need to be carried out to be sure.

The excavations were carried out by students from the university of Palermo, accompanied by professors from the archaeology and anthropology departments.

Caminneci was delighted that they were able to participate in such an important find.

“Working at digs is fundamental for students. Archaeology is very practical and you learn as much in the field as you do in books.”

The dig was carried out in full view of visitors to the site, one of whom even filmed the archaeologists exhuming the ancient remains. A video of the discovery can be seen below.