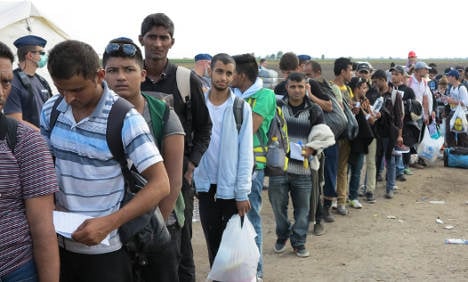 “Yes, not everyone is on board at the moment,” Luxembourg minister Jean Asselborn told a press conference in Brussels after an emergency meeting.

He said however that there was a “large majority” in favour of the redistribution in principle, and they would return to the issue in October.

German interior minister Thomas de Maiziere said there was a “bitterness” over the fact that a unanimous vote was not possible on Monday, and that a majority vote would have to be held later.

EU migration commissioner Dimitris Avramopoulos added: “For our proposal on 120,000 we did not have the agreement we wanted.”

Slovak interior minister Robert Kalinak said his country, the Czech Republic and others refused to back the plan, and called for a summit of EU leaders.

“There was no consensus, several countries disagreed. It was not only us or the Czech Republic, but other countries as well,” he was quoted as saying by the Czech news agency CTK.

“When other interior ministers also say this issue is about the European Union, it is up to the European countries' leaders to talk about it. This is crucial in my opinion.”

The ministers did formally agree, however, to launch a plan first proposed in May to relocate 40,000 asylum seekers from Greece and Italy over the next two years, according to quotas suggested by the Commission.

Avramopoulos said there had been “very heated debates at national and a European level.”

“The commission is determined to take action. We will need another council meeting in the coming days,” he said.

The quotas can be passed by a qualified majority, rather than unanimously, under complex EU rules, but that would show a sign of disunity that the bloc can ill afford.

EU Vice President Frans Timmermans said the “numbers (being accepted) today are much too small” and warned of the growing risk to refugees as winter draws near.