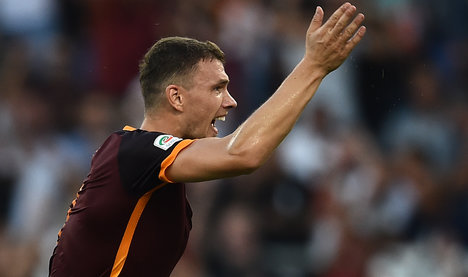 AS Roma are hoping to make amends for last year's 7-1 defeat to Barcelona at the Stadio Olimpico on Wednesday. Photo: Filipo Monteforte/AFP

A humiliating 7-1 defeat to the Bundesliga giants on what was Roma's return to the competition after a three-year absence served as a harsh wake-up call as the Italians' crashed out of the competition at the group stages.

Having added strikers Edin Dzeko and Iago Falque, as well as several defenders during the summer, Roma coach Rudi Garcia now has the backbone of a squad that pundits feel has scudetto-winning credentials.

Domestically, Roma have avoided defeat so far, and beaten champions Juventus to boot, to sit two points behind Serie A leaders Inter Milan.

Yet Barcelona were virtually impervious when they humbled Juventus 3-1 in last season's Berlin final and, in a Group D that also includes Bayer Leverkusen and BATE Borisov, Luis Enrique's troops are fully expected to finish top of the pile.

Barcelona arrive in the Eternal City as favourites, especially after they dominated Roma 3-0 in a pre-season friendly when Neymar, Lionel Messi and Ivan Rakitic were all on target.

Giallorossi goalkeeper Wojciech Szczesny knows Barcelona's potency only too well, having been beaten twice by Messi, once from the penalty spot, when former club Arsenal lost 3-1 at the Camp Nou on their way to a 4-3 aggregate defeat in the 2010/11 round of 16.

But the Polish shot-stopper, whose strong performances so far have pushed Morgan De Sanctis down the pecking order, has sounded a note of defiance.

“We can't wait to come up against a fantastic side like Barcelona,” said Szczesny after Saturday's 2-0 win away to league new boys Frosinone.

“We already showed against Juventus we're confident when facing the best teams in Europe.”

Fans might be feeling confident but Roma's recent league win over the Italian champions must be seen in the light of Juve's current struggles that have seen them drop to 16th place with only one point from three league outings.

Barcelona's recent record in the competition – they won four of six away games last season, scoring in every one – speaks for itself, although the Catalans' record against Italian teams is less impressive.

Barcelona have won just one of their last six matches in Italy, beating AC Milan 3-2 in the 2011/12 group stages, and won only six of their 20 away matches against Serie A sides.

“We've got a tough group, like most teams,” said Barca coach Enrique, who as coach of Roma in the 2011-2012 season led them to a seventh place finish.

Barca defender Javier Mascherano told UEFA.com he expects Roma to take the game to the reigning champions, although Barca would relish a team taking them on at what they do best.

“Roma play football. This sometimes works well for us, but they're a quality side and we know they're going to play their game from the off and fight for every ball,” said Mascherano.

“They are a side with tradition and, above all, we know how hard it is to go to Italy and play. Tactically, they're teams that defend well and it's not easy to score against them. It will be a difficult game for us.”

Despite making his league debut this season last weekend, Roma captain Francesco Totti is set to start on the bench after Juan Iturbe impressed on his second-half appearance against Frosinone.

Barcelona welcome defender Gerard Pique back to the fold after he missed their first three La Liga games through suspension, while Enrique has left Dani Alves off his 20-man travelling party.