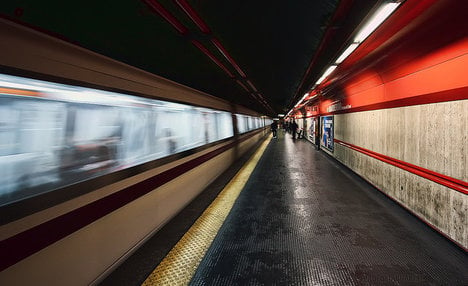 Four students were trapped on Saturday night when a Rome metro station was shut before the last train had passed. Photo: Paolo Margarai/Flickr

The students were returning home from a night out in the city centre and had made the last metro train home, Corriere Della Sera reported.

They were travelling on the A line of Rome's metro towards Battistini and got off at Flaminio – a stone's throw from the popular tourist hot spot Piazza del Popolo.

“I was walking along the exit tunnel, and the other guys were ahead of me, then they stopped and turned around,” Lorenzo, a 22-year old student, told Corriere.

The gates that permit access to the underground had been closed and locked shut – before the final train had passed.

“At first I panicked – but at least I wasn't alone. I did feel really angry though. How come the transport authority can't coordinate the closure of its stations?!”

The group soon took to their smartphones, trying to send out an SOS – but much to their horror – the emergency services didn't respond.

After half an hour, they finally got through to an incredulous police officer, who couldn't believe what had happened.

Security staff soon came to free them. But in spite of avoiding a night in the station, the students are unlikely to forget the evening in a hurry.

“What if it had happened to a tourist, or a young girl travelling alone? How did they manage to close the station before the last train passed?”