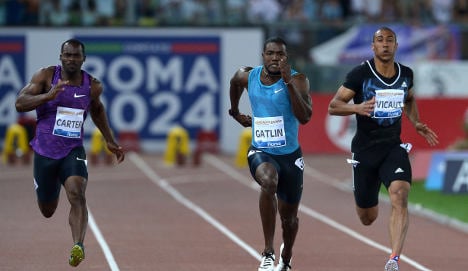 Rome is vying for the 2024 Olympic Games. Photo: Tiziana Fabi/AFP

With former Ferrari president Luca di Montezemolo at the helm, Rome has pulled off an OIympics bid.

It comes two years after the Eternal City shelved plans to throw its hat in the ring for the 2020 event due to concerns over rising costs as the country battled an economic crisis.

A lot has changed since then. For a start, Rome has a different mayor, Italy has a different prime minister, and the economy is showing signs of recovering, albeit mildly.

It goes without saying that the city, with its history, culture and wonderful climate, would make a fantastic backdrop for the competition.

Rome made no secret of its intention to go for the Games, and has since late last year been working on its bid with fervour.

For the ambitious premier Matteo Renzi in particular, the Games would give Italy a chance to relive the glory days of 1960, when it last hosted the summer event. But since then, the image of Rome has been blighted by a mafia-linked corruption scandal, a mobster's flashy funeral as well as endless stories about the state of its infrastructure and rubbish-strewn streets.

Let's not forget the huge amount of money, intended for public projects across Italy, that has been fleeced from the government's coffers, something that weighs on the minds of Italians, as was evident in an opinion poll by La Repubblica late last year.

The poll found that 60 percent of those surveyed did not believe Italy was capable of hosting such a high profile event and only nine percent believed the country would be able to repeat the 1960 success.

But all bids for the Olympics raise similar concerns in almost every city that vies for the event, with the hosts usually managing to pull-off something spectacular.

So how will Rome fare against its rival bidders?

Let's take a look at the challenges it faces ahead of the winning host announcement in September 2017: Budapest put in the latest bid of all five cities, nominating itself in July this year. But Hungarians haven't warmed to the idea, with just 49 percent hungry for the Games.

That said, the Italians haven't been overly optimistic so far either – unless they're now feeling buoyed by their country's sporting prowess since Flavia Pennetta's victory in the US Open at the weekend.

We still don't know too much about the Budapest bid, except that the budget is an impressively sleek €2.4 billion – the cheapest of all. In fact, this is Hungary's main argument for why it should host, taking advantage of the David and Goliath card in true Olympic spirit.

Its committee urged the International Olympics Committee to take a chance on a smaller city for a change, citing the games of Stockholm and Helsinki in 1912 and 1956, respectively. Los Angeles can lay claim to having the most recent experience of playing host, having held the summer Olympics in 1984. While that might feel like only yesterday for some of us, it will have been 40 years ago by the time 2024 rolls around.

The city will be acknowledged for its reputation of being a capable host, with some commentators noting the successful reductions to traffic in the city when the Games were being held in 1984.

LA is likely to struggle, not least because it was a default entry after Boston pulled out late in the game.

Another obstacle for the Americans is that by 2024, the Games won't have been held in Europe for 12 years, since London in 2012. The IOC will be keen to keep Europe in the loop.

The US city, which calls itself the “Eastern Capital of the Pacific Rim” in the promotional video for the Olympics below, has budgeted €4.1 billion and expects €1.5 billion in private investments.

Hamburg has never hosted the Olympic Games, and it appears that many of its residents aren't all that keen on the idea either. There was a strong “no” campaign leading up to the official bid, and a recent survey found that 49 percent said they didn't think Hamburg had a good chance of winning.

Germany hasn't hosted the Games since the 1972 event in Munich, and it was actually the capital that had the strongest voice in the campaign for the bid. But, in March, Germany's interior minister announced that it would be Hamburg, in northern Germany, that would be putting its foot forward.

During its campaign for the bid, Hamburg had promised to build a brand new stadium, while the German Olympic Committee said Hamburg “offers a fascinating and compact Olympic concept and the development of a north German and north European metropolitan region can be promoted”. Paris Mayor Anne Hidalgo said that she was inspired to back the French capital after witnessing the millions of Parisians who came together to march the streets in the wake of the January terror attacks.

And by 2024, the city will no doubt be looking at its best thanks to the Grand Paris initiative, a massive construction project planned to begin in January next year.

Mostly existing infrastructure will be used and the only thing that would need to be built is a swimming pool, an Olympic village for the athletes, and a media centre.

But Rome is a strong candidate, and was the first city to officially announce its bid (back in 2014).

Rome has a smaller budget than Paris (€4 billion compared to €6.2 billion), and has hosted the Olympics more recently than Paris (most recently in 1960).

Rome has the former Ferrari president Luca di Montezemolo at the helm of its bid for the Games, who has pointed out that existing infrastructure would be used, and that events could even be held in nearby cities like Florence, Naples, or Milan.

Meanwhile, the Olympics village would be located in Rome’s Tor Vergata area, where new facilities would be built and existing ones completed, the city's Olympics committee said last week.

This would also require the construction of an underground train link to connect the area with the rest of the city.

But the biggest negatives for Italy are the concerns about the cost, while it will have a challenge ensuring any new building projects do not fall into corrupt hands, and actually get completed on time.

While Rome's “professional campaign” has been praised by international sports officials, it has been attacked in Rome by some politicians who fear that the mafia could take over contracts.