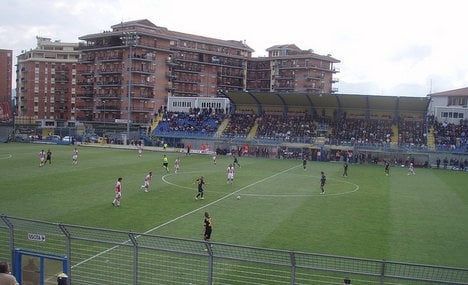 Police have told fans of newly promoted Frosinone to stop watching their team's matches from the balconies of homes overlooking the stadium. Photo: Avi Tm/Flickr

For football-mad Italians who are lucky enough to be living in one of the buildings overlooking the stadium, the occasion of Frosinone's derby match against AS Roma was a good opportunity to invite friends and relatives around to watch it live.

After all, the side are competing in their first ever season in Itay's top flight and the Stadio Mantusa, where Frosinone play their home games, holds just 10,000 people.

But in the eyes of the Police, inviting people around to watch the game poses a threat to public safety.

In a public notice made after the match, the police called attention to the “large presence of people on balconies and in attics overlooking the stadium,” and announced that they would be asking building administrators to prevent so many people entering the residences on match days.

“Such a crowd of fans puts public safety at risk, because it raises the possibility of structural damage and collapse,” said the notice.

This is not the first incidence of Italian football fans going to great lengths to see a game.

In 2006, Juventus, freshly relegated on the back if the Calciopoli match-fixing scandal, made their way to Calabria to face minnows, Crotone.

It was the hottest ticket in town, but Crotone's stadium, the Enzio Scida, only holds 4,000 spectators.

Fortunately, the ground is overlooked by the San Giovanni di Dio hospital. And so for the Juventus game the director of the local health authority decided to allow people to watch the game from the upper floor corridors – and closed the hospital from 3pm on the day of the match.

“After that you'll only be allowed in if it's a serious case,” the hospital's announcement at the time said.