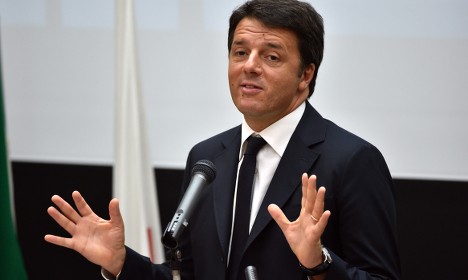 Employers confederation Confindustria said they now expect the economy to expand by one percent this year and 1.5 percent in 2016 (up from 0.8 and 1.4  percent) on the strength of an economic pickup noted over the summer, due to an unexpected strong rise in industrial output and a drop in unemployment to a two-year low.

Confindustria's forecasts were released on the eve of Renzi's presentation to cabinet of a growth-orientated 2016 budget expected to place Italy back on a collision course with the European Commission, which is pressing Rome to act faster to cut its €2.2-trillion debt mountain.

The government raised its own forecast for GDP growth this year to 0.9 percent earlier this week and has already announced the key components of its planned fiscal giveaway: the abolition of a much-loathed tax on primary residences and a local tax designed to cover municipal services.

The budget is also expected to include a jobs and growth package for the relatively impoverished south of the country, which has borne the brunt of the economic woes Italy has suffered almost continuously since it entered European monetary union at its launch in 2000.

Finance Minister Pier Carlo Padoan confirmed on Wednesday that Italy would be asking Brussels for permission to slow the pace of its previously announced deficit reduction plans in order to promote growth.

“We are evaluating the best way to obtain further margins of flexibility provided for under European Union rules, with regard to both structural reforms and investment spending,” Padoan told lawmakers.

Italy's budget deficit is forecast to be the equivalent of 2.6 percent of GDP this year and Renzi's government said in April it would aim to bring it down to 1.8 percent in 2016.

'Italy will do okay'

Renzi now appears to have jettisoned that target in order to ensure a decisive pullaway from recession and Padoan said only that the government was committing to running a lower deficit in 2016 than this year.

Although Italy's deficit level is comfortably below the EU's three percent ceiling, the concern in Brussels is that running a bigger deficit will jeopordise efforts to bring down the country's crippling debt level.

The government currently forecasts that the debt will peak at 132.5 percent of GDP this year and then start falling from 2016 onwards.

At issue in the negotiations with Brussels is the pace at which this happen, which will be influenced by the still-unclear scale of the tax cuts and new spending Renzi is planning.

Italian media and one of the premier's economic advisers, Filippo Taddei, have put the total margin Rome hopes to gain from EU budget flexibility at €10.5 billion  ($12 billion) while Renzi himself said at the weekend that it would be 17 billion euros.

“Brussels will allow some fiscal slippage, but not €17 billion,” said Holger Schmieding, chief economist at Berenberg Bank. “Perhaps some seven billion. So there will be some serious discussions about that.”

Despite the prospect of a wrangle with Brussels, the economist said the outlook for Italy was positive with Renzi reaping the rewards of reforms adopted last year which made it significantly easier for employers to hire and fire.

“The economy has taken off nicely, helped by cheap oil, a soft euro and – most importantly – labour market reform,” he said.

“Unless China and the emerging market crisis escalates badly, Italy will do okay.”

A European Commission spokesman would not be drawn on Renzi's bullish suggestion that the increased flexibility is already a done deal.

“We will assess Italy's fiscal position vis-a-vis the Stability and Growth Pact in the autumn in our opinion on the draft 2016 budget plan, once we have received it.”

The final version of the draft outlined on Friday is due to be presented to the Italian parliament on October 15th.