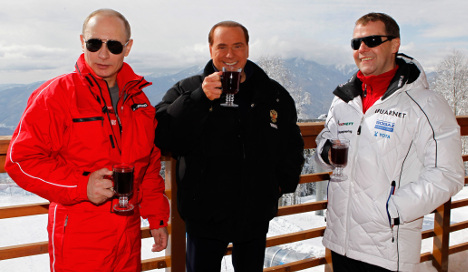 The longstanding friends uncorked the 240-year-old Jeres de la Frontera, reported to be worth $150,000 (€131,386), when they met in Crimea, which was annexed last year from Ukraine by Russia, last Friday.

The pair visited an Italian war cemetery near the Black Sea port of Sevastopol during the trip, while also squeezing in a tour of the prized Massandra winery, where they reportedly supped the vintage Spanish tipple.

Citing “large-scale misuse of property”, prosecutors in Ukraine are now preparing charges against the winery’s director, Yanina Pavlenko, for opening the precious wine, brought to Crimea by the wine-loving Russian Count Mikhail Vorontsov when he was general governor in the early 19th century, according to Ukrainian media reports.

Pavlenko confirmed to AP that she showed rare wines to Berlusconi and Putin, but did not comment on whether the high-profile guests drank any.

The Massandra winery was established by the Count and used to house his own collection. When it was under Ukraine's ownership, presidential permission was needed to approve the sale of any vintage bottles. So under Ukrainian law, gifting a bottle without that permission amounts to theft.

But now that the winery belongs to Russia, whether or not the investigation itself will amount to anything remains to be seen.

Ukraine on Monday banned Berlusconi from entering the country for three years over the Crimea visit, arguing that it broke the norms on entry to “temporarily occupied territory” and that it “contradicted EU policy”.