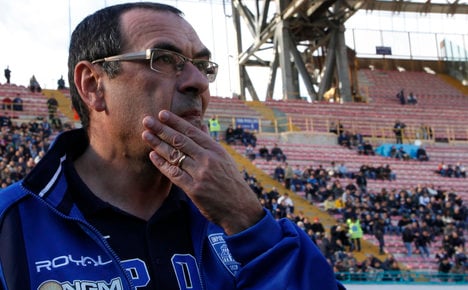 Napoli boss Maurizio Sarri is under pressure to get a win during this weekend's Serie A action. Photo: Carlo Hermann/AFP

With stuttering champions Juventus slipping to 16th after two defeats and a draw, Napoli's sluggish start to Serie A under Sarri had almost gone unnoticed – until Diego Maradona dropped a bombshell last week.

The outspoken former Napoli striker said Sarri was “the wrong man for the job” of leading the Partenopei, who won the last of their two league titles when the Argentinian legend last starred at the San Paolo in the early 1990s.

Napoli president Aurelio De Laurentiis has since leapt to the defence of Sarri, telling Pupia TV: “Maradona makes sensationalist statements to make an impact. It's like he throws a stone into the water to watch the ripples.”

Napoli routed Club Brugge 5-0 in their Europa League Group D game on Thursday, but the Belgians were completely outclassed.

It was Sarri's first competitive win with Napoli and the Italian, who replaced Rafael Benitez on the back of a strong showing as coach of Empoli last season, is reported to be on borrowed time.

After Thursday's win, the coach was still circumspect: “I saw some positive things but we lost focus too easily.

“The team has lacked consistency, we've had spells of good play but not been consistent and that has cost us points.

“Tonight, we were more ruthless.”

Lazio suffered a 4-0 battering by on-form Chievo in their last away fixture but bounced back with a 2-0 win over Udinese last weekend.

Both goals came courtesy of well-travelled AC Milan striker Alessandro Matri, who, having played on loan for Fiorentina, Genoa and Juventus, was given a hostile reception after he signed a loan deal with Lazio until the end of the season.

Thanks to Matri's brace, Lazio are only three points off the pace of Inter, who are two points clear of a clutch of sides notably including Torino, Chievo, Sampdoria and Roma.

Juventus, meanwhile, swap the glitz and glamour of beating Manchester City 2-1 in their Champions League opener for what defender Martin Caceres believes will be a gritty encounter away to Genoa.

“We know we're a good side, we showed that against Manchester. But Serie A is more difficult: when you play in Europe, you're given lots of space and the game is a lot more open,” the Uruguayan told Juve's in-house channel JTV.

On-loan Chelsea midfielder Juan Cuadrado said Juve's win over Manuel Pellegrini's richly-assembled side has given the Old Lady of Turin a much-needed and timely boost.

“We haven't started the season well, but this has recharged our batteries,” said Cuadrado.

Inter Milan remain the only unbeaten side in Italy's top flight, following their 1-0 win over city rivals AC Milan last Sunday when Fredy Guarin hit the winner for the Nerazzurri.

Roberto Mancini's men travel to Chievo looking to maintain that record, but the 'Flying Donkeys' have been the revelation of the season so far.

Rolando Maran's men have hit eight goals in three games and sit in second place, two points off the pace.

After holding Juventus 1-1 in Turin, Mancini's men face a tough time at the Bentegodi Stadium.

“But we'll be looking to maintain our good run of form.”

Inter's city rivals Milan host Palermo on Saturday looking to make it two home wins out of two, although coach Sinisa Mihajlovic is expected to reshuffle his side over concerns Keisuke Honda is struggling in the playmaker role.