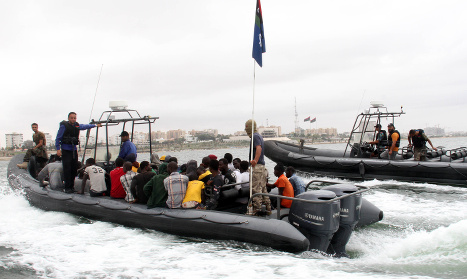 Among those taking part was Doctors Without Borders ship Bourbon Argos, which told AFP it had rescued over 800 people, who were expected to be brought to safety in Italy along with the rest of those saved.

“We started before first light this morning with our first rescue. We rescued two wooden fishing boats and two rubber dinghies,” said Simon Burroughs, emergency coordinator for search-and-rescue missions by the medical group — commonly known by its French initials MSF.

The 20 operations took place between 30 and 40 nautical miles off the Libyan coast, and saw rescue workers pluck people from eight boats and 12 dinghies. The body of a woman was also recovered.

The mass effort was carried out by an Italian military ship, the MSF's Bourbon Argos, the MAOS search and rescue Phoenix, a Croatian vessel operating under EU border agency Frontex, two vessels operating within the Eunavfor Med mission — one British, one German — and the Italian coastguard.

The coastguard said another mission was under way to save yet more people who had run into difficulty during the perilous crossing from Libya to the Italian shores.

In videos sent to AFP by MSF, hundreds of people in brightly-coloured clothes could be seen sprawled out on the Argos, a nearly 70-metre-long Luxembourg-flagged ship which typically carries around 700 people.

“It's quite a big boat, but at the moment every inch of deck space is covered. People are extremely relieved to be off of their sinking boats,” Burroughs said.

“We've had about a week of bad weather that stopped any kind of rescue operations, but last night and this morning weather changed,” he said, as children were heard crying in the background.

“There are multiple nationalities… Thankfully, everyone is in good health,” said MSF spokesman Sami al-Subaihi, who is seen aboard the ship in the video.

Launched in May, the Argos has been handling large rescue missions due to the growing waves of people seeking refuge in Europe.

“It's a large operation, but unfortunately it's becoming quite a typical operation… Our last rescue was over 1,000 people,” Burroughs said.

The Bourbon Argos has a staff of 26 people on board, including medical specialists.

On Friday, 102 migrants were rescued in the Mediterranean by Libyan authorities, and seven other bodies were recovered. The Italian coastguard said it coordinated the rescue of a total of 1,013 migrants.

Another 124 people were detained by Libyan coastguard officials Friday as they were preparing to cross to Europe.