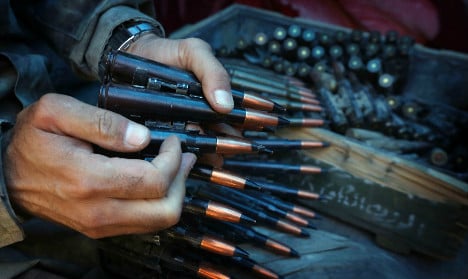 An Iraqi Kurdish Peshmerga fighter guards a position at the frontline of fighting against Isis. Photo: Safin Hamed/AFP

Of those which have joined Isis from Italy, six were Italian nationals and another six had dual nationality. Announcing the figures on Sunday, Pinotti said: “It’s terrible to imagine why they do it, but it happens.”

The government has taken a tough line against Italian citizens found to be fighting with the terrorist group, the defence minister added. “We have not been timid,” Pinotti said, quoted by Il Sole 24 Ore. “The most numerous contingent from Europe in the anti-Isis fight is Italian and now we’re increasing it.”

“The fight against Isis is a priority in the world, it’s a cancer that we must not allow to advance in humanity,” she said.

Pinotti is next month due to meet her US counterpart, Ashton Carter, Il Sole said. During the meeting Pinotti said she will express her “concerns about how the anti-Isis coalition is working.”

The International Centre for the Study of Radicalisation and Political Violence (ICSR), based at King's College London, said in January that more than 20,000 foreign fighters had joined Isis in Iraq and Syria.

An estimated 80 people were thought to have left Italy at the time, equivalent to 1.5 per million.