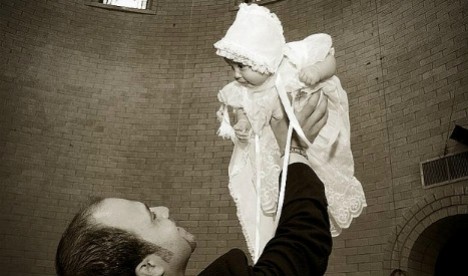 Baby Antonio was due to be baptised on Saturday in Catania, an occasion announced by his family on billboards put up across the city. While such an advertisement is common in Sicily, the particular wording prompted the ire of locals.

“This marvelous creature is…cosa nostra!” said the sign. While “cosa nostra” directly translates as “our thing”, it is also the name of the infamous Sicilian mafia. The crime organization has a history of heroin trafficking, protection rackets and murder on a vast and vicious scale, including the assassination of Italy’s top two anti-mafia magistrates.

That the criminal underworld appeared to be lauded by Antonio’s family prompted Catania’s police commissioner, Marcello Cardona, to order to posters be removed.

But the baby’s father, Francesco Rapisarda, said he had not intended to insult Italian institutions. “It’s nothing bad, it’s a cute thing, we did it to do something different,” said Rapisarda, who has in the past been investigated for mafia association.

“This has been a family custom. Me and my wife did the same thing for the baptisms of our other two children,” he said, quoted in La Repubblica.

“In 2008, for the photo of the advertisement of the baptism of our first son we dressed him like a little devil, with a lot of little angels around and the writing: ‘Born to be different’.”

Antonio’s baptism was planned for 20 September, with a guest list including Italian TV celebrities, but was reportedly cancelled after the billboards hit the national press.