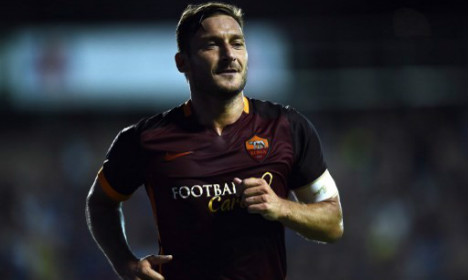 Totti was 17 years old when he hit his maiden goal for Roma. Photo: Filippo Monteforte/AFP

“Well done to our captain for your 300th goal ! What an achievement ! Major respect,” screamed a message posted on Twitter by club teammate Antonio Rudiger.

For its sincerity, Rudiger's message was spot-on. But it was Roma's failure to beat Serie A minnows Sassuolo, in a 2-2 draw, that stole the headlines from the veteran forward's achievement.

Totti was 17 years old with a 'short back and sides' haircut when he hit his maiden goal for Roma against Foggia in 1994 – and his longevity and loyalty over the tears have made the 38-year-old forward a global icon.

But the socia media tribute from Roma's newly-signed German defender Rudiger stood virtually alone in a sea of silence – and relatively muted reactions to Totti's feat in the Italian sports media are testament to a general feeling that Totti is playing on borrowed time.

“A record for Totti, but little to smile about,” was the headline of an editorial on Totti by Rome-based daily Il Messagerio, who dedicated a full page to the city's favourite footballing son.

In what is his 21st season with the club, Totti can still bang in the odd goal. Although it was marginally offside, his 300th Roma strike in all competitions on Sunday took his Serie A tally to 244, 30 behind the all-time leading tally set by Silvio Piola before his retirement in 1954.

Indeed, ask fans of Roma about how they feel about 'Il Re di Roma' (the King of Rome), and the answers will be almost universally positive.

Totti's contribution to Roma over two decades of unflinching loyalty are virtually unrivalled in a sport where chasing big-money contracts is the norm, and that has endeared him to fans across the world.

When he hit a brace of goals in a derby win over Lazio last season, Totti's trademark showmanship came to the fore when he took a 'selfie' of himself during the game with Roma's fans in the background. But lately, Totti's star has been on the wane. Roma, who have finished Serie A runners-up the past two seasons, have played notably better whenever their club icon has been on the bench and, with the advancing years, Totti's days appear numbered.

Totti made only his second start of the season on Sunday as coach Rudi Garcia made six changes from the side that battled to a precious 1-1 draw with defending Champions League winners Barcelona last week, when Totti remained on the bench throughout.

But their failure to beat a Sassuolo team that won promotion to Italy's top flight only two seasons ago by far outweighed Totti's feat of scoring a goal that Italy's sports press unanimously labelled offside.

Garcia, who has done well to command the respect of a dressing room in which Totti's influence has been felt for over two decades, was less than happy with the draw.

Indeed, the Frenchman appeared to point the finger at several players when he said post-match: “What I find strange is that the players who did not play against Barcelona struggled more, in physical terms, than the ones who did play.”

Although he applauded Totti's feat, Garcia added a caveat. “It's an amazing landmark, but I'm sure he would have liked to celebrate it with a victory,” said Garcia. “Soon, he will be 39 years old and, when you play as a forward, it's difficult to play a lot.”