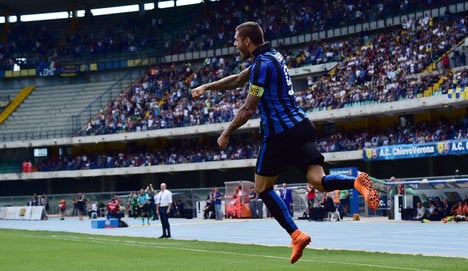 At this early stage of the season Inter are looking to maintain their strong early form. Photo Giuseppe Cacace/AFP

With four consecutive wins and only one goal conceded, Roberto Mancini's men are already being talked of as scudetto challengers to four-time consecutive champions Juventus.

But Mancini – who won seven trophies including three consecutive league titles in his previous spell in charge (2004-2008) – was quick to dampen any premature enthusiasm.

“Our league position doesn't count at the moment. What does count is being among the top sides over the course of the season,” Mancini said after Sunday's 1-0 win at Chievo.

With a two-point lead over Torino, Roma four off the pace and Juventus eight points adrift in 13th, Mancini has some room to manoeuvre.

But with Inter missing out on the Champions League for the past two seasons, the Italian is in no mood for complacency.

“We always have the weight of expectation, because we're Inter Milan. We need to be protagonists this season,” added Mancini, who made significant additions to his squad, notably in midfield and defence, in the off-season.

“Our defence is better, because the more you work, the more you improve. Our new players are helping us a lot.”

Inter should welcome Brazilian defender Joao Miranda, signed from Atletico Madrid, back for the visit of Verona after a recent injury, although fellow defenders Juan Jesus and Jeison Murillo are both expected to miss Wednesday's San Siro outing.

Verona are winless and are likely to be without injured pair Luca Toni and Rafa Marquez.

Torino have plenty to be proud of having only dropped points in a 2-2 draw at Verona a fortnight ago.

Giampiero Ventura's side boasts wins over Frosinone, Fiorentina and Sampdoria but their trip to a Chievo side still smarting from defeat to Inter looks anything but straightforward.

Prior to their defeat at the weekend, Chievo sat second in the table with an impressive tally of eight goals to their account.

The Flying Donkeys will be missing DR Congo midfielder Paul-Jose Mpoku after he suffered a fractured cheekbone in an aerial challenge with Inter's midfield enforcer Felipe Melo.

Roma's 2-2 draw with Sassuolo last weekend came with Francesco Totti's 300th career goal for the club, for whom he made his league debut in 1994.

But dropping two points has put unwelcome pressure on Rudi Garcia's men ahead of a difficult outing at Sampdoria, who have hit nine goals thanks largely to Eder's five-goal haul.

Anything less than a Roma win in Genoa would not upset Juventus ahead of the visit of league new boys Frosinone.

Juventus suffered a blow on Monday after striker Mario Mandzukic was sidelined for up to three weeks with a tear in his right thigh, also putting the Croatian out of the Turin giants' Champions League clash at home to Sevilla in a week.

However, coach Massimiliano Allegri received the more welcome news that Alvaro Morata has been given the all-clear after being forced off late in Juve's 2-0 win against Genoa with an abdominal muscle problem.

Elsewhere, Mario Balotelli could make his first start since returning to AC Milan as the Rossoneri travel to Udinese on Tuesday looking to build on their gutsy 3-2 win over Palermo at the weekend.

On Wednesday, Lazio host Genoa looking to bounce back after a humiliating 5-0 rout by Napoli, who will look to keep banging in the goals when they visit new boys Carpi.