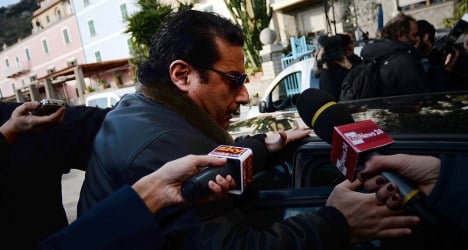 Lodging their appeal over the February verdict, in which Schettino was sentenced to 16 years in prison over his role in the 2012 shipwreck, Tuscan prosecutors said the punishment did not befit the crime.

The captain’s “Titanic responsibility…must correspondent to an exemplary punishment,” prosecutors from Grosseto said, quoted by Ansa.

They criticized the way the sentence was calculated and argued the punishment handed down by judges was not appropriate given Schettino’s behaviour. During the trial prosecutors called for a 26-year sentence for the captain’s role in the disaster.

Schettino was found guilty of multiple manslaughter, related to the 32 people who lost their lives, causing a shipwreck and abandoning the cruise liner before everyone was safely ashore.

He was dubbed “Captain Coward” after claiming he fell into a lifeboat, but Schettino said he was unfairly targeted by Italian media. Five fellow employees of the cruise ship owner, Costa Crociere, avoided jail terms by agreeing plea bargains.

Schettino remains at liberty during the appeals process, which must pass through both the appeals court and Italy’s high court before the verdict can be finalized. The captain’s lawyers are expected to request his sentence be reduced.