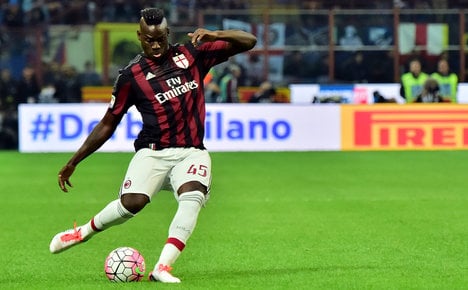 In his first start for the Rossoneri since moving back to the club on loan from Liverpool at the start of this season – having left Milan a year earlier to sign a permanent deal with the Premier League outfit – the controversial Italy international forward needed just five minutes to open his account.

The result moved Milan provisionally up to fourth ahead of the rest of the midweek matches on Wednesday and Thursday.

But Balotelli said it hadn't been easy for him as Udinese's players tried to wind him up.

“It was a difficult game for me because I knew they wanted to provoke me,” he told Mediaset Premium.

“I got a yellow card for nothing and that ruined my game a bit. However, I'm happy with my performance.”

Further goals from Giacomo Bonaventura and Cristian Zapata had seemingly put the game to bed before the half-time whistle.

“The first half went well, there was only one team on the pitch,” said Milan coach Sinisa Mihajlovic.

“At half-time I told the lads a match lasts 95 minutes, not 45, and that rather than manage (the lead) we needed another goal.

“We need to learn better how to manage the nerves.”

Udinese remain in the relegation zone on three points after a fourth defeat in five matches this season.

All eyes were on Balotelli, though, even before the 25-year-old stepped up to curl a free-kick into the top corner of goalkeeper Orestis Karnezis's net.

“Balotelli had a great game, with a goal and being fouled many times,” added Mihajlovic.

“He never reacted and was always lucid. The real Balotelli is back.”

Just five minutes later and the hosts faced an uphill battle as Bonaventura converted from the centre of the area after a through ball from Riccardo Montolivo.

The game appeared over as a meaningful contest in first-half injury time as Colombian centre-back Zapata headed home a Bonaventura corner.

Udinese wasted no time after the restart in getting back into the match, though, as Ghana midfielder Badu arrived late in the box to volley into the bottom corner after good work from veteran Italy international forward Antonio Di Natale on 51 minutes.

And just before the hour mark, Duvan, another Colombian, poked home into an empty net after Milan keeper Diego Lopez missed a cross from Cyril Thereau.

With Balotelli by now a peripheral figure in the match, the hosts exerted intense pressure on the Milan goal and Thereau was just inches away from getting on the end of a Di Natale cross that would have left him with only Lopez to beat.

Lopez was the hero in the last minute as he tipped over Bruno Fernandes's fierce drive from outside the box after a training ground corner routine.

And from that resulting corner, French-born Mali centre-back Molla Wague headed just wide of the near post.

Udinese were becoming desperate, and indisciplined, as Bruno picked up a second booking, leading to a red card, deep into injury time.