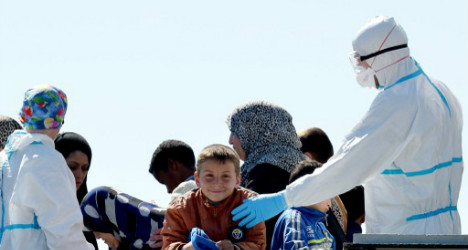 A boy saved by the Italian navy in April 2015. Photo: Alberto Pizzoli/AFP

The group of 282 people were rescued on Wednesday morning, a relatively quiet day in the Mediterranean following more than 4,500 people being saved in 20 separate operations on Saturday.

The scale of arrivals in recent months has prompted the EU to host an emergency summit of the region’s leaders on Wednesday, aimed at boosting aid and tightening borders to tackle the current crisis.

But a growing east-west split over a deal to relocate 120,000 refugees from Italy and Greece threatened to poison the talks.

Despite Croatia reporting a record number of arrivals and countries across the region feeling the strain from refugees from war zones like Syria and Afghanistan, EU leaders appeared as divided as ever.

Hungary, the Czech Republic, Romania and Slovakia voted against the relocation plan, arguing the EU has no right to override national sovereignty and make them accept people from overwhelmed frontline states.

“The most important thing is that there should be no moral imperialism,” Hungary's hardline leader Viktor Orban said during a visit to the southern German state of Bavaria when asked what he expected from Merkel.

EU President Donald Tusk will hope to move on from the 120,000 refugee relocations, which is just a faction of the 500,000 refugees and migrants who have come to Europe's shores and the estimated four million on Syria's borders.

Greece was expected to come under particular pressure to accept EU help to strengthen its borders, being where most of those fleeing across the Mediterranean initially land.

Tusk, the former Polish premier, will also press EU leaders to offer more aid to affected countries outside the bloc including the Western Balkans and Syria's neighbours Turkey, Jordan and Lebanon, as well as to the UN World Food Programme (WFP).

Ahead of the meeting, the European Commission, the executive arm of the 28-nation bloc, proposed an extra €1.7 billion in funds. Orban has proposed a €3 billion fund for dealing with the crisis but it was not clear whether the leaders would discuss that.

With tensions brewing, EU Migration Commissioner Dimitris Avramopoulos rejected any suggestion that the rare failure to reach a unanimous agreement on the plan did more harm than good. “On the contrary, it is a victory for the EU and for all member states,” Avramopoulos said on Wednesday.

Yet Slovakian Prime Minister Robert Fico, whose country will be made to take 800 refugees under the plan, said he was prepared to break the EU's rules rather than accept the “diktat” from Brussels.

“Slovakia is not going to respect mandatory quotas. We are filing a lawsuit with the (EU's) Luxembourg court,” Fico said, quoted by the website of Slovakia's leading SME daily.

The scale of the challenge was evident in Croatia, where nearly 9,000 refugees and migrants entered on Tuesday alone, a record daily number since they started to arrive a week ago after Hungary closed its borders.

Large number of people poured overnight towards the newly-opened refugee centre in the village of Opatovac, in eastern Croatia, before being bussed to Hungary, state-run HRT television reported.

More than 44,000 refugees had entered Croatia from non-EU Serbia in the last week, it said.

In a sign of the problems within the union, the European Commission said it had issued formal warnings to 19 EU states including Germany and France for breaching rules on the treatment of asylum seekers.

“It is about time that member states stepped up to the plate and did what they need to do,” European Commission Vice President Frans Timmermans said.

US President Barack Obama pressed European nations on Tuesday to take their “fair share” of refugees, despite accusations that Washington has done little to address the crisis.

With millions of Syrians forced into camps across the Middle East, tens of thousands crossing Europe on foot and hundreds washing up dead on beaches, the US has promised to take in only 10,000 as refugees next year.

That a figure is dwarved by the up to one million Syrian refugees Germany is expecting to welcome this year alone.