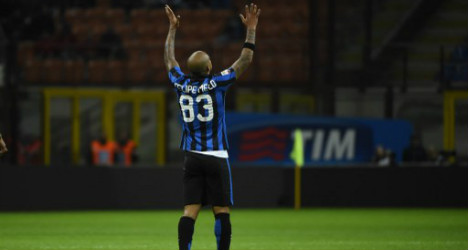 Inter's blistering start to the season has left many commentators believing they have already stolen a march on four-time consecutive champions Juventus in the fight for this season's scudetto.  Only five matches into the campaign, those predictions look to be ringing true.

Brazilian Felipe Melo rose to head the game's only goal 11 minutes after the restart as Inter held on to claim their fifth consecutive win – the first time the Nerazzurri have achieved such a feat since the start of the 1966-67 season.

Inter owner and president Erick Thohir was at the San Siro and said: “I'm delighted…winning our opening five games is incredible, but we have many other matches to win so we'll go one step at a time.”

His thoughts were echoed by coach Roberto Mancini, who when asked about their status as title favourites quipped: “Maybe we are, until our next league match!”

Inter are away to high-flying Fiorentina this weekend, and Mancini added: “The first games of the season are all difficult, you can that by the fact other teams that should be fighting for the title are struggling.

“Teams get better as each game passes. It's one step at a time.” Mancini's men sit top with a three-point lead on Fiorentina, who saw Jakub Blaszczykowski and Nikola Kalinic score one apiece in 11, late second-half minutes to secure a 2-0 home win over outclassed Bologna.

Sassuolo are only a point further adrift in third, thanks to the Tuscans' shock 1-0 win at Palermo, courtesy of Sergio Floccari's stunning first-half effort for the visitors.

At the Stadio Olimpico, Lazio made amends for their 5-0 humiliation at Napoli on Sunday with a deserved 2-0 win over Genoa that saw Filip Djordjevic, with a diving header and Brazilian Felipe Anderson, with a superb, curling effort, wrap up the points for Stefano Pioli's men.

Juventus coach Massimiliano Allegri rested a number of regulars, including goalkeeper Gianluigi Buffon for the visit of Frosinone.

But the Italian's tactics ultimately backfired after Leonardo Blanchard headed home from a corner in injury time to level Simone Zaza's strike minutes after the restart.

It gave the new boys their first point of the season, and coach Roberto Stellone was particularly happy: “For an ex-Torino players, it's a particularly pleasing result.”

Juventus had claimed only one point from their opening three games, their worst start to the campaign in several decades, before ending their drought at Genoa on Sunday. This latest setback has left last season's beaten Champions League finalists in tenth place, eight points adrift of Inter.

Allegri hit out: “We can't be conceding corners to a team like Frosinone at this stage of the game.

“We just didn't manage this game well and paid the price for naive errors. We should have put the game beyond doubt well before then.”

Scudetto rivals Roma are faring slightly better, but coach Rudi Garcia was left ruing a massive defensive blunder as the Giallorossi looked to be heading for a well-deserved point at the Luigi Ferraris stadium.

Roma bossed the opening half and Sampdoria broke the deadlock against the run of play four minutes after the restart when Eder stepped up to fire a free kick just inside Morgan De Sanctis's near post.

Roma pulled level halfway through the second period when Mohamed Salah, unmarked inside the area, fired Miralem Pjanic's slide-rule pass into the roof of the net. Five minutes from time Kosta Manolas's attempt to clear Eder's drive across goal was comical, the ball splicing into the net.

Roma's first defeat of the campaign left them in ninth place, seven points behind Inter and one behind AC Milan, who edged Udinese 3-2 on Tuesday.