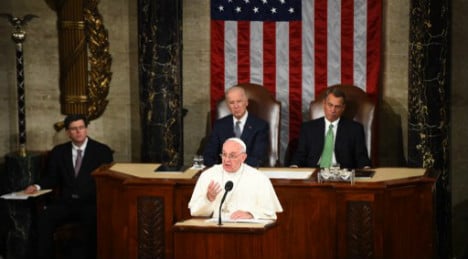 A day after meeting with President Barack Obama and enjoying a rapturous welcome from thousands of people on the streets of Washington, Francis became the first pontiff to address a joint session of the Senate and the House of Representatives.

Three crisp raps of the gavel from the podium announced the arrival of Pope Francis, who wore flowing white vestments as he strode down to the front of the chamber to applause and a standing ovation.

He triggered another round of clapping from the hundreds of lawmakers, Supreme Court justices, cabinet ministers and Vice President Joe Biden by saying it was an honor to be in “the land of the free and the home of the brave.”

Francis spoke heavily accented English in a wide-ranging speech interrupted often by applause from his American hosts as he touched on social, financial and humanitarian issues.

The 78-year-old pope addressed one of the ugliest and most tragic crises of the day – the relentless flow into Europe of Africans, Afghans and people from the Middle East, mainly Syrians fleeing their country's ruinous war.

“Our world is facing a refugee crisis of a magnitude not seen since the Second World War,” he said.

But the Argentine-born pontiff also spoke of the plight of poor Central Americans and Mexicans who make dangerous, often deadly treks across the Mexican border into the United States, into states like California and Arizona. In both cases, he said, all people want is an opportunity for a better life.

“We must not be taken aback by their numbers, but rather view them as persons, seeing their faces and listening to their stories, trying to respond as best we can to their situation,” he said. “To respond in a way which is always humane, just and fraternal.”

To some extent, the Pope was speaking to deaf ears in addressing the US immigration plight.

Despite pushes from Obama, the Republican-controlled Congress has failed to approve a sweeping reform that would have helped the estimated 11 million people, mostly Latinos, living in the United States without residency papers to gain legal status. Many Republicans say the first priority should be securing the US border.

On climate change, the pope alluded to his recent encyclical in which he denounced global warming as a woe caused by mankind. Here, lawmakers gave him another strong round of applause.

“I am convinced that we can make a difference, I'm sure, and I have no doubt that the United States – and this Congress – have an important role to play. Now is the time for courageous actions and strategies,” the pope said.

A major global climate conference is scheduled for December in Paris. The goal – elusive in several previous such gatherings as rich polluters like the US and developing ones like Brazil and China failed to reach agreement – is to strike a deal to cut greenhouse gas emissions blamed for global warming.

On other issues, the pope called for a worldwide end to the death penalty – the US is one of the few countries that still practice it – and denounced the arms trade as being fueled by hunger for “money that is drenched in blood.”

The pope also expressed concern over the fate of families, which he said are threatened like never before. In particular, young people facing economic despair and other problems are discouraged from having kids, and others are so rich that starting a family is a distraction, he said.

After his speech, the pope stepped out onto a balcony overlooking the National Mall and greeted tens of thousands of cheering well-wishers down below.

He switched to Spanish – “buenos dias,” he said, eliciting a roar of approval – and asked God to bless the crowd. He also asked any non-believers or people who perhaps cannot pray “to send good wishes my way.”

“Thank you very much and God Bless America!” he concluded in English.

The scene of multitudes mirrored that of Wednesday, when wildly happy crowds on the streets of Washington screamed and waved to the pope as he drove by in his open-sided pope-mobile.

The pope was to leave Washington later on Thursday for New York, where he will address the United Nations on Friday. He wraps up his historic six-day US trip on Saturday and Sunday in Philadelphia at an international festival of Catholic families.