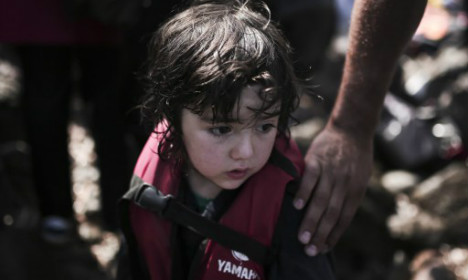 A Syrian child arrives on European shores, on the Greek island of Lesbos. Photo: Angelos Tzortzinis/AFP

The EU meeting came a day after the regional bloc’s interior ministers agreed to resettling 120,000 refugees from Italy and Greece, which combined have seen more than 485,000 people arrive by sea since the start of the year.

Following months of disagreement, Renzi said the outcome of the latest summit demonstrated “we can finally say that immigration has become a European question.”

“It’s a victory for those such as Italy that from the first day asked for a common policy,” he wrote on Facebook, blaming the “nationalistic” tendencies which had previously reigned.

“Tonight in Brussels the idea of a united Europe has won; now everyone will work to make it happen,” he said. “Italy as the homeland of rights and ideas will do its part with its head held high and with the pride of those who work to save lives of our refugee brothers and to save European identity.”

The new plans include a €1 billion aid package to the UN’s refugee agency (UNHCR), the World Food Programme – which has suffered from a lack of funds in recent months – and other aid agencies.

More assistance is planned for the countries hosting the majority of Syria’s refugee population of over four million; Lebanon, Jordan and Turkey.

While the EU has agreed to provide greater assistance to Syrian refugees, it also plans to strengthen border controls after states such as Hungary began building fences to prevent people entering the country.

The Western Balkan states are also due to get greater assistance to manage the uptick in arrivals, while migration “hotspots” will be pinpointed where greater help is needed.