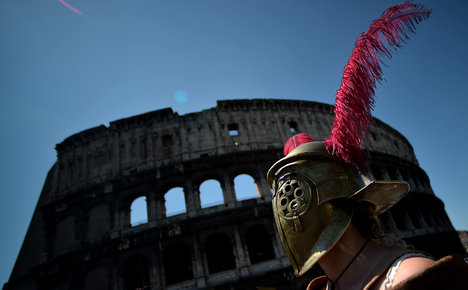 A team of foreign journalists were robbed by gladiators outside the Colosseum in Rome, the Italian police did nothing. Photo: Filippo Monteforte/AFP

Christian Sabbagh from Romania's Kanal D was filming outside the famous Roman landmark when he and his team decided to pose for a photo with the gladiators  in order to document the tacky tourist tradition.

Once they had posed for the photo, an elderly man dressed as Julius Caeser told the team that the photo would cost them €100.

When the group tried to explain that the price was too high – one of the gladiators stole Sabbagh's wallet and removed €50 from it. “We'll just take half then,” the gladiators explained.

A heated argument ensued, during which the gladiators became aggressive and threatened to beat up the team's cameraman. Another gladiator even exposed his genitals in front of the camera.

Finally the police arrived and the group reported what had happened to them. But instead of helping, the police simply told them that they 'don't want any scandals' and try to convince them not to report the incident.

“If anything like this happened in Romania these police would be fired.” said Sabbagh at the end of the video.

”You cannot tell me that those police officers weren't friends of those gladiators. And to think this a place where thousands of tourists are arriving from around the world.”

See the shocking video (in Romanian) for yourselves below: