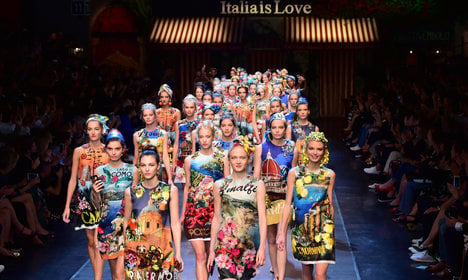 The spring/summer collection from Dolce and Gabbana harks back to a golden age of Italian fashion. Photo Giuseppe Cacace

On the penultimate day of a fashion week in which visions of what women will be wearing next summer have been dominated by the quirky, the sporty and the nautical, the Sicilian duo offered a typically sexy and nostalgia-sodden reminder that maybe there is not so much about the country that needs updating.

“Italia is Love” they called it, but the message might better have been summed up as “Italia is loved” as the audience was taken on a tour of the country's iconic historic sights to the strains of Dean Martin singing “On an Evening in Roma,” and “That's Amore”.

Embroidery was on almost everything, from Capri trouser suits to figure-hugging black mini dresses in what one half of the design duo, Stefano Gabbana, said was a tribute to the post-World War II tailors who helped create the status of modern Italy as a magnet for tourists from all over the planet.

“The starting point was a book we found about the history of Italian fashion,” Gabbana said backstage after the show. “We are actually in it! – I said to Domenico (Dolce) 'My God we have to start doing something different!”

Deprived of fabrics and with some foodstuffs in scarce supply, the disease-haunted aftermath of World War II was a bleak time for Italy.

But it was also a time of extraordinary improvisation and creativity which laid the foundations for the decades of rapid expansion that were to follow, a genius for design helping to make the once impoverished country a export-fuelled economic power.

“At that time, in Rome and the rest of Italy, the tailors started to make simple lines, simple outfits with embroidery, hand-crafted embroidery from home,” Gabbana said.

“This trend started and they called it boutique. It was the beginning of pret-a-porter.”

“So it was very Dolce and Gabbana because we worked in this mood for a long time.”

The message has a particular relevance at a time when, as he tries to shake up the country in many different ways, Italy's reformist Prime Minister Matteo Renzi is also making great efforts to urge the nation to take heart from the extraordinary heritage of the country.

“We are Italian. We know exactly what we have in the blood but we don't realize because we live in it,” said Gabbana.

“Every day we can see the Tower of Pisa or the Colosseum or Milano or the Amalfi Coast.

“For the people from outside it is very different, it is a surprise.”

And through Alta Moda (as the tailoring movement after the war came to be known) we discovered this because our customers they come from all different countries.

“All these people, they love to come here. They come for food, for clothing, to do shopping to do everything.”

And through a celebration of Italy's past, Gabbana said they were also paying tribute to the Chinese, Russian and American customers who have helped turn their own modest tailoring outfit into a multi-billion dollar business.

And like Renzi, they believe a celebration of the past is a good starting point for Italy to make the changes it needs after a decade and a half of marking time economically and, some would say, creatively as well.

“We know that Italy is not like this today,” Gabbana added. “It is a wish. We have this memory and we would love to bring it back.”