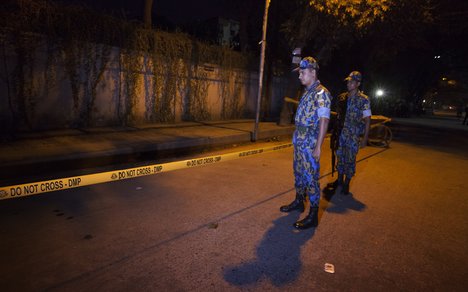 Police guard where the man was shot dead in the Gulshan area of Dhaka, Bangladesh. Photo: Stringer/AFP

Home Minister Asaduzzaman Khan sought to calm escalating security fears in the country, denying the jihadist group was behind the murder on Monday night and describing it as an “isolated incident”.

“We have only heard about Isis in Bangladesh but we haven't found any of them,” Khan told reporters.

Cesare Tavella was shot three times on Monday night by attackers who fled on a motorcycle. No arrests have been made.

IS claimed “a security detachment” tracked and killed the 50-year-old with “silenced weapons” in Dhaka's Gulshan district. If the claim is verified, it would be the group's first attack inside Bangladesh.

The minister tried to reassure those living in the capital's diplomatic quarter, saying security was sufficient. “There is nothing to worry about,” he said.

But in an updated advisory Tuesday, the British Foreign Office (ministry) warned its officials against attending gatherings of Westerners in Bangladesh, saying there was “reliable information” that militants may be planning to target Western interests.

“A number of international schools and expatriate clubs have closed for the day on September 29th as a precaution,” the ministry also said on its website.

“You should be particularly vigilant at this time.”

The US embassy on Monday said its diplomats would be barred from attending international hotels and other such gatherings and advised its citizens to follow suit.

Other countries also issued warnings including Italy, which confirmed the charity worker's death and advised nationals “to limit their movements” in Bangladesh.

The attack came a day after Cricket Australia said it was delaying its departure to Bangladesh for an October tour due to Canberra's fears that militants may be planning to target Australian interests.

Cricket Australia said it was seeking assurances from its Bangladesh counterpart before going ahead with the trip.

Bangladesh prides itself on being a mainly moderate Muslim country. But the gruesome killings of four atheist bloggers this year rocked the country and sparked a crackdown on local hardline Islamist groups.

Bangladesh authorities were initially criticized for failing to protect bloggers, most of whom are living in fear.

Police were also investigating claims that Al-Qaeda in the Indian Subcontinent was behind the machete murders of the bloggers, whose writings were deemed blasphemous.

But security experts said there was no clear motive for the killing of Tavella, a programme manager for Netherlands-based church group ICCO Cooperation which focuses on global food security and economic development.

“Cesare was a hard-working professional, committed to help the people of Bangladesh,” the group said in a statement on its website.

“He was respected and loved by all his team members in the country office and field offices around the country.”