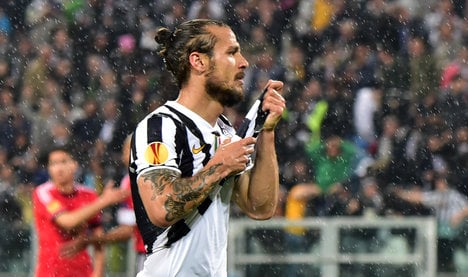 The incident happened on Monday night when Cáceras reportedly drove down a one-way street, lost control of his red Ferrari F142, drove into a bus shelter and crashed into two parked cars.

According to Gazetta dello Sport and La Stampa newspapers, he failed a breath test after police arrived on the scene.

“Martín Cáceres' behaviour on the night of 28th to 29th September is a serious violation of his duty to the club, as well as damaging the club's image,” Juventus said in a statement announcing the suspension.

Cáceras would be “temporarily excluded from the first team”, the statement added.

Juventus, who meet Spanish club Sevilla in the Champions League on Wednesday, are already without several players through injury, including Sami Khedira, Claudio Marchisio, Stephan Lichsteiner and Mario Mandzukic.

Speaking ahead of the clash, club captain Gianluigi Buffon was quick to jump to the Uruguayan international's defence, and insisted the incident would have no impact on Juve's preparations to claim their second successive win in Group D.

“Martín has the total backing of all the squad,” said Buffon. “He's a guy who has always given his best and he is loyal. He knows he's made a mistake.”

“Obviously it was bad timing, coming two nights before a big game like this, but he's understood and he's sorry. “Hopefully a win will help us all forget what's happened.”

Cáceres' future at the club may now hang in the balance as it is not the first time he has been involved in a car crash while playing for the club.

He crashed a Porsche SUV in 2013, suffering head injuries, although on that occasion reports said he had been hit from behind by another car that had run a red light.