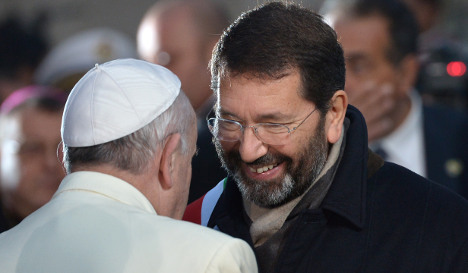 The unforgiving assessment of Ignazio Marino – a man the Italian media love to hate – further heightened tensions between the pope and the mayor in the run-up to the start of the Holy Year of Mercy in December, with the Vatican fearful the Italian capital is ill-prepared for the millions of extra pilgrims.

“He pretends to be Catholic, it came on him all of a sudden. It doesn't happen like that,” Francis said.

The pope's cutting comments on the politician – who observers say rubbed the pontiff up the wrong way with his vocal support of gay marriage and euthanasia – came as Francis returned from a barnstorming visit to the United States and Cuba.

Asked on the flight home if the pope had invited Marino, Francis said, “I didn't invite the mayor. Is that clear? I asked the organizers and they didn't invite him either.”

Marino's presence on the last leg of the papal tour, coming hot on the heels of his holidays in the US and the Caribbean, did not go down well in Rome as the capital reels from a series of crises.

With the Italian press and social media humming with the pope's putdown, Marino said he had been not been invited by the pope but by the city of Philadelphia.

“If the most popular man in the world takes down one of the least popular in Italy, that says that all the rules of the game have been thrown up in the air, including possibly those of mercy,” said the Turin daily, La Stampa.

“The Pope freezes the mayor of Rome,” said the centre-left La Repubblica, whose editorial said the swipe could almost be seen as a bid to “hand Rome back to the right who had poisoned the city”, a reference to the Mafia corruption scandal which has engulfed its former right-wing mayor Gianni Alemanno.

Others saw the pope's disdain for the mayor as being linked to his support of gay marriage, and in particular the city “legalizing” same-sex marriages conducted abroad, even though Italy still bans such unions.

One thing is sure – the row will not help relations as Rome gears up to welcome 20 million pilgrims for the Year of Mercy, which begins on December 8th, when the faithful will be granted special indulgences, the highest form of forgiveness.