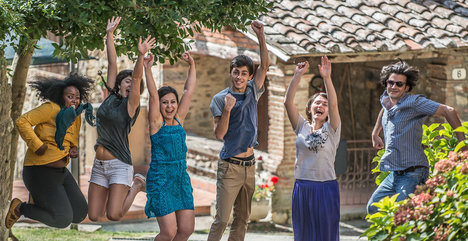 Rondine is now home to a group of international students with a difference. Photo: Rondine Cittadella della Pace

Twenty years ago it was an abandoned collection of houses on the banks of the River Arno in Tuscany, but today Rondine, the so-called 'City of Peace', is a medieval hamlet with a difference.

It was brought back to life by the Rondine Association – a non-profit organization with a unique goal. The association offer students from war-torn areas across the world scholarships to study at Italian universities and invites them to live side-by-side in the medieval suburb.

It all began in 1997 when the Archbishop of Arezzo granted the cluster of derelict buildings to the Rondine Association, so that they could be turned into a modern set of classrooms and student housing.

But unlike most university residences where students from similar backgrounds live side-by-side, in Rondine, students must live with their 'enemies'.

It is a place where students from both sides of bitter conflicts must learn to share spaces and resources: Israelis and Palestinians, Russians and Georgians, Armenians and Azerbaijanis.

While living in Rondine, the association also offers the students academic support, lessons in the Italian language and culture and training in conflict resolution.

The idea is that the experiences of the young people there can help transform them into tomorrow's leaders by providing them with a unique skillset which they can use to help end years of conflict and rancor in their home countries.

These lofty ambitions have earned the hamlet a nomination for Nobel peace prize. The association's name was put forward by Marina Sereni, vice-president of Italy's Chamber of Deputies,  in July.

Sareni stated that beyond its investment in young people and its sincere attempts to create long-term political dialogues in war zones, Rondine had another ace up its sleeve: its Italian origins.

“Rondine has a symbolic power that is difficult to equal,” she wrote. “Every year, a tiny village in the heart of Tuscany, the heart of European civilization, produces a new generation of leaders capable of forwarding real change throughout the world.”

But can Rondine really scoop the world's most famous peace prize?

According to its founder, Alfred Nobel – the prize is awarded to whoever has “done the best work to establish fraternity between nations, the abolition and reduction of standing armies and the promotion of peace congresses.” So it's certainly in with a shout.

But the president of the Rondine Association, Franco Vaccari, was coy about the association's chance of scooping the prize and rejected the idea that Rondine was a school that taught peace. The medieval hamlet of Rondine on the banks of the River Arno. Photo: Rondine Citadella della Pace.

“I don't use the word peace easily,” he said in an interview with Italian media last week. “It's a word that's loaded with rhetoric and honey-coated utopia. Here students don't learn peace. They learn to live together while asking themselves and each other the most important questions about life and our planet.”

But Vaccari told The Local that the association would be a worthy recipient of the Nobel Peace Prize, thanks to its humble origins and success forged on the back of generous investment from public and private funds.

“It's about encouraging small action. We are a tiny hamlet and we go about our business quietly, which is maybe the best way to achieve peace.”

Now, Rondine is a unique academic environment that is home to 30 students each year, all of whom who are studying for undergraduate or masters degrees in Italian institutions.

At the end of each semester, freshly graduated students follow the paths trodden by Rondine alumni and return home to work with political agencies and NGOs where some are already playing key roles in international conflict mediation.

“About 160 students have come through here so far,” Vaccari said. “Like most students they go on to do very different things. One student is now vice foreign minister in Georgia and is mediating in the Abkhazia – Georgia conflict, so it's great that Rondine has helped them reach such a large platform.”

Today, the organization has 23 employees and a volunteer staff of 60 and has links with universities across the world. All this, achieved in a medieval suburb in Tuscany which was a derelict husk just 20 years ago.

The Nobel Committee will decide the winners of the 2015 Peace Prize on October 9th at a ceremony in the Norwegian capital of Oslo. But in order to win the famous prize the association will need to fend off stiff competition from 272 other candidates from around the world.

Should they manage to do so, they will join a list of previous winners that includes Martin Luther King, Nelson Mandela and the Red Cross – an organization which has claimed the prize of three separate occasions.

The last time Italy won the Peace Prize was in 1907, when Ernesto Theodoro Moneta scooped the award for his role in the creation of the League of Nations.

Regardless of the outcome, Vaccari is relaxed about the future.

“If we won I'd be really happy, even though it would probably bring with it a huge demand for places so we would have to be careful.”

“But I'm not really thinking about it to be honest,” he added.