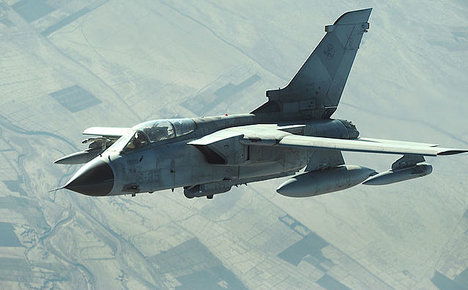 The Italian Ministry of Defence has denied reports stating that Italian Tornado aircraft are about to be used to bomb Isis targets in Iraq. Photo: US Air Force/wikimedia

A statement released by the ministry on Tuesday said that a bombing campaign was “a hypothesis being evaluated with our allies, not a decision that has been taken.

“In any case, a decision would need to pass through parliament,” the ministry added.

The statement was released following reports in the press that Italian jets would soon be deployed to carry out airstrikes on suspected Isis targets in Iraq.

Italian forces have been present in the Middle East as part of a western coalition against Isis for over a year but until now they have played a supporting role.

The Italian forces in the coalition consist of four Tornado fighter jets, a fleet of unarmed drones and a KC767 refueling aircraft, all of which are operated by 140 pilots and ground staff from an airbase in Kuwait.

Until now the Italian forces have been limited to carrying out reconnaissance missions. But in spite of the ministry's denial they could soon be engaging with targets on the ground.

France and Russia have already started bombing raids in Syria and the Iraqi government has asked Italy to help them fight Isis forces along its border with Syria, not far from the capital, Baghdad.

It is unclear whether Italian politicians would be willing to green light a bombing campaign – in the past Italian premier Matteo Renzi has repeatedly stated that Italian craft would not be used for air raids in Syria.

However, Corriere della Sera reported that following the Iraq government's plea, Italian opinion on airstrikes might be changing.

Today, US Secratary of Defence, Ashton Carter, is visiting the Nato air base of Sigonella in Sicily, after which he will fly to Rome to meet with Italian President Sergio Mattarella.