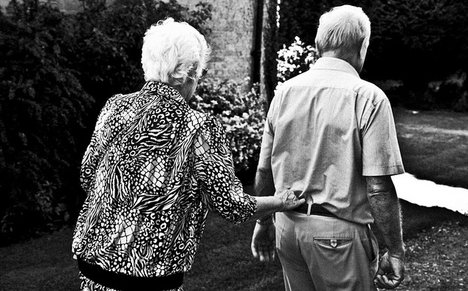 An 84-year-old woman has asked to divorce her 88-year-old-husband on the grounds that she is not sexually fulfilled. Photo: Abdulsalam Haykal/Flickr

The woman, a retired teacher, has already outlived two husbands and lives with her third, a retired bank employee, in Scafati.

While Italians from the south have a reputation for vitality in their advanced years, the woman claims to have been disappointed with her third husband's lack of peformance in bed.

According to Cronache Scafati, she recently told her lawyer she only has sex with her husband twice a month, and that this was simply not enough for her. In fact, she said she had been better with her previous husbands.

Her lawyer was distressed by the divorce request and suggested that she find a new activity to replace sex: maybe one more fitting to her age. But the pensioner was having none of it.

She argued that seeing as she had no grandchildren to pass the time with, she didn't see why she had to give up carnal pleasures in spite of her advancing years.

Unconvinced by her reply, the lawyer tried to mediate between the pair.

In the end, the woman admitted that her attempts to divorce her husband had really just been an elaborate rouse to encourage him to take Viagra.

Unfortunately for the woman, her attempt failed.

The husband refused to take the magic pill, citing a heart condition would not allow it. But the insatiable pensioner dismissed his refusal, telling him: “Rubbish! You just have palpitations from time to time.”

According to the awyer, the defeated man then admitted: “In the end, I just prefer playing boules with my friends.”

“Then I'm finding myself a new lover!” was the wife's stern reply.