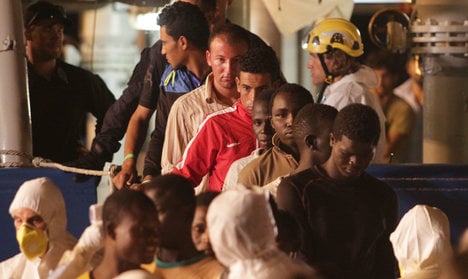 A total of 1,830 people were brought ashore in six different operations to save passengers in four stricken boats and two rubber dinghies, the coast guard said.

Three Italian vessels and one ship each from Britain and Ireland, which are taking part in the EU Navfor Med mission, were involved in the rescue effort.

Over half a million migrants and refugees have landed on Europe's shores so far this year, according to the UN refugee agency. Some 2,980 people have perished or disappeared trying to make the crossing.

Most of those setting out from Libya are Africans, with Turkey being the main launchpad for crossings by people fleeing conflicts and misery in the Middle East and Asia.

From Wednesday, ships operating under the aegis of EU Navfor Med will have new powers to tackle the people smugglers who pack migrants and refugees into overcrowded boats.

Members of the force will have the right to board, search, seize and divert vessels found in international waters that are suspected of being used for smuggling.