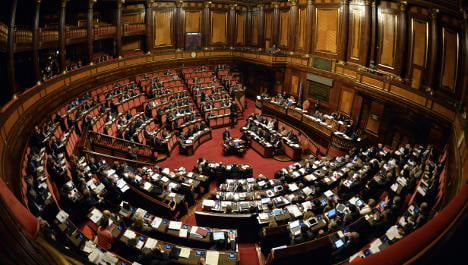 The two senators allegedly made the obscene gesture during a debate in parliament. Photo: Andreas Solaro/AFP

Lucio Barani, a socalist who leads the Liberal Popular Alliance, and Vincenzo d’Anna, of the same party, allegedly mimed the sexual act in the direction of Barbara Lezzi, of the Five Star Movement (M5S).

Barani is alleged to have made the gesture first, before it was repeated by d’Anna during the debate last Friday.

The obscene gesture outraged female senators, who called for the men to apologize.

But both insisted that their actions were misunderstood.

“With my hand turned to my own face, I was inviting those who were interrupting Senator Falanga to swallow the papers they were waving so vehemently”, Barani told the news agency Ansa.

Both senators were given a five day suspension by the president of the Senate, Pietro Grasso.

Luigi Zanda, the head of the ruling Democratic Party described the event as “absolutely inappropriate for parliament”.”