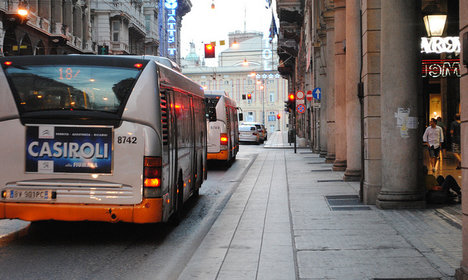 A young man with Down syndrome was attacked on a crowded bus in Genoa, but passengers failed to intervene. Photo: Rinaldo Mazzoni/Flickr

The young man, a 26 year-old from Ecuador, was listening to music and humming when a passenger took umbrage with his singing and started hurling abuse at him, Il Fatto Quotidiano reported.

“It was shameful,” said the bus driver, Morena Baldini. “He was just sitting there listening to music and humming. Nobody, absolutely nobody, did anything to help him.”

The young man is well known among bus drivers in Genoa and is a frequent passenger on the city's buses. “Normally he sits by me,” said Baldini. “But on Monday he sat towards the middle of the bus near the exit.”

After enduring verbal abuse, the man was then violently attacked by the same male passenger when the bus reached the final stop and as all passengers left on board got off.

“He was trying to shove him off the bus,” explained Baldini, who was watching events from a monitor in the cockpit. “When he couldn't manage it he just punched him in the face and ran off.”

“I was furious. I asked the passengers why they did nothing to help him.”

Following the attack, Baldini called the police and the man's mother reported the incident.

“Who would do this to my son?” she was reported as saying.

This incident is just the latest in a string of violent attacks on Genoa's public transport. In August, a man was set upon by a group of youths for 'being gay,' and left in a coma.

Recently the city has installed armoured cabins on all its buses to protect drivers and has provided a special pedal they can use to call the police if there is a serious incident on board.