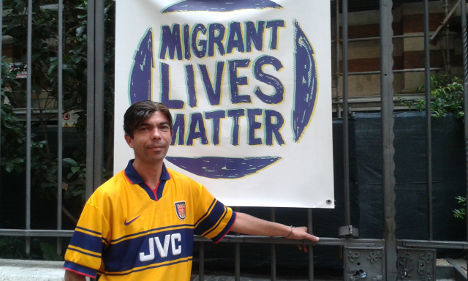 Rakin, an Afghan refugee, outside the Joel Rafuma Refugee Centre in Rome. Photo: The Local Italy

Some €500,000 – that was the price on Rakeen’s head when he was kidnapped in Kabul in 2008, by one of the many criminal gangs that had emerged in Afghanistan in the aftermath of the US-led invasion.

And in revenge for the rising literary star, who was 25 at the time, miraculously escaping captivity four months later, the gang went to his family home and shot dead his father and four younger siblings.

It was only by chance that Rakeen wasn’t killed too. On the night of the shootings, he had been at the hospital visiting his mother, who was recovering from a heart attack.

Now in Italy after being turned away for asylum in Norway, Rakeen might well be safe, but he is completely alone and in limbo.

The abduction turned his life upside down in every sense. Until then, he had been studying for a degree in psychology, while his books condemning the Taliban were receiving acclaim.

But coming from a relatively wealthy family meant he was also a prime target for his abductors.

“I had a wonderful life. We had money.. we had a car, a beautiful house, everything a person could have wanted and needed,” he tells The Local.

The captors wanted the ransom money from his father, the owner of a car sales business, and would torment him and his wife with photos and videos of their eldest son being beaten and tortured.

“They threatened them to not tell the police. This still this goes on in Afghanistan today… even for just €100, they’re ready to kill someone.”

During his four months in captivity, Rakeen was fed bread and water – purely to keep him alive until the ransom was paid.

But this, ultimately, went in his favour.

“After the guard came into my room one morning to give me food and let me use the bathroom, he forgot to re-tie my hands behind my back,” he says.

Heart pounding, Rakeen waited until he was certain the guard wouldn’t return, and then climbed up to a small window.

In a struggle that took him about half an hour, he managed to squeeze himself out of the window, before tumbling two floors to the ground.

“It was so small – I could see my bone as I tried to push my left shoulder through – I think losing a lot of weight during that time helped,” he says.

“It was also a miracle that I managed to land feet-first. I was in so much pain, but I just ran as fast as I could. I didn’t stop to think.”

Rakeen kept running until he reached a busy road, and flagged down a taxi.

“The taxi driver was a good man. He took me to the nearest police station, where I reported the kidnappers. They knew I was missing as my father had reported it, despite the threats. They managed to arrest some of the kidnappers, but the others fled.”

But the happy reunion with his family was overshadowed by a steady flow of threats of revenge from the abductors who had managed to escape. The family moved to a different area in Kabul, but seven months later, the kidnappers found them.

After his father, two brothers and two sisters – the youngest of whom was just seven years old – were murdered, Rakeen and his mother, a history teacher, sought help from extended family. But none came.

“They were scared for their own safety,” he says.

“The only person who offered to shelter us was an old school friend.”

Still living under the shadow of a threat to their safety, Rakeen’s mother encouraged her son to leave Afghanistan. The plan was for him to seek asylum in Europe and for her to join him later.

He caught a plane to Sweden, and from there travelled overland to Norway. But Norwegian authorities rejected his request for asylum, even though he provided strong evidence that his life was in danger, advising him instead to move to a safer part of Afghanistan.

His only hope was Italy, which he’d heard was the only EU country that didn’t send migrants back to the first country in which they had applied for asylum.

Any money he had left was used to pay a people smuggler, who took him south to Italy.

“Italy was my only hope,” he says.

But coming to Rome, despite finally being safe, brought more hardship. Soon after arriving in 2012, his mother had another heart attack, and died.

Rakeen spent the first year or so living in a tent with other Afghan refugees on the outskirts of the capital. After starting his asylum process, he was then allocated a bed at a state-run refugee centre, which he said was “filled with insects and mice”.

But there are restrictions on the amount of time refugees can stay at the centres, and so by this summer, Rakeen was homeless again.

“I perceived Rome to be a Holy city…but the reality I found was inconsistent with my perception. I didn't come as a tourist, I came to save my life.”

He says that during this time, the only thing that kept him going was his late mother's words of encouragement.

“If I'd lost her at the same time as the rest of my family, I think I would have gone crazy. She gave me hope, she was a good teacher, to her children and to her students.”

But things started to improve when Rakeen discovered the Joel Nafuma Refugee Centre, which, located in the basement of a church in central Rome, has become a sanctuary for those who have fled war and persecution.

Volunteers there provide breakfast as well as basic items, such as razors, toothpaste and second-hand clothing. They also give lessons in Italian and psychological support to refugees.

It is also a place where refugees can come and meet each other, play board games, watch films, and build a livelihood. Together with a group of other refugees, Rakeen formed the Artisans Together project. In a room at the centre, they spend their days making cards, baskets and other arts and crafts, which they hope to sell. As well as giving them purpose, it’s their only means of income, however small. He said the work they do has helped to restore “the feeling of belonging”.

“Even though I have documents for Italy now, it's a struggle to find a job, and I can't leave for anywhere in the EU with more prospects.”

It was through the centre that Rakeen met the volunteers behind Paul's Place Project (PPP), a fledgling housing project in Rome which is finds landlords willing to house refugees.

After sleeping on a park bench for a few weeks this summer, he moved to a flat in a town on the outskirts of Rome.

“If it wasn’t for all of these volunteers, I’d have no hope. They there take care of us like we’re part of their family.”

But without a stable income, Rakeen finds it hard to think about the future, while any aspirations he does have are simple.

“With a house, wife, children, job…just comfortable…nobody wants to be a refugee forever.”